Ernest Borgnine, who won Oscar for ‘Marty,’ showed comic side in sitcom, dies at 95 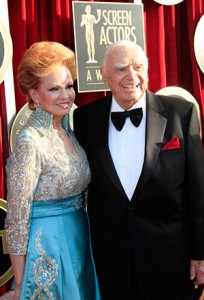 LOS ANGELES — Ernest Borgnine seemed born to play the heavy when he burst onto the Hollywood scene as “Fatso” Judson, a sadistic stockade sergeant who viciously beats a private to death in the 1953 movie “From Here to Eternity.”

(PHOTO: Tova and Ernest Borgnine at the 17th Annual Screen Actors Guild Awards at the Shrine Auditorium in Los Angeles, Calfiornia, on January 30, 2011. Borgnine died Sunday, July 8, 2012. He was 95.)

But two years later came the title role in “Marty,” where the stocky, gap-toothed Borgnine defied typecasting and earned recognition as a versatile actor by inhabiting the part of a lonely Bronx butcher looking for love.

He went on to a prolific seven-decade career in film and television, moving easily from scoundrels and serious portrayals to a comedic role on the 1960s TV sitcom “McHale’s Navy” and a spate of grandfatherly parts.

Borgnine, who won an Academy Award for his performance in “Marty,” died Sunday of apparent kidney failure at Cedars-Sinai Medical Center in Los Angeles, said his longtime publicist, Harry Flynn. He was 95.

The role opposite Frank Sinatra in “From Here to Eternity,” based on James Jones’ acclaimed novel depicting Army life in Hawaii before the attack on Pearl Harbor, moved Borgnine into the top echelon of movie villains in films such as “Vera Cruz” and “Bad Day at Black Rock.”

He left expectations behind in “Marty,” the 1955 film version of Paddy Chayefsky’s original TV play about a sensitive Italian American bachelor butcher who longs for more than simply hanging out with his pals on Saturday night.

Borgnine’s sensitive portrayal of the self-described “fat ugly man” not only earned him an Oscar for best actor, but the movie also won Academy Awards for Chayefsky and director Delbert Mann, as well as the best picture Oscar.

In a film career that began in 1951, Borgnine appeared in more than 115 movies, including “Johnny Guitar,” “Demetrius and the Gladiators,” “The Flight of the Phoenix,” “The Oscar,” “The Dirty Dozen,” “The Wild Bunch,” “Willard,” “The Poseidon Adventure” and “Emperor of the North.”

From 1962 to 1966, he played the title role in the ABC sitcom “McHale’s Navy.” As the regulation-breaking commander of a PT boat in the South Pacific during World War II, Borgnine was pitted against the constantly frustrated Capt. Binghamton (played by Joe Flynn). Tim Conway played McHale’s bumbling sidekick, Ensign Charles Parker.

Born Ermes Effron Borgnino in Hamden, Conn., on Jan. 24, 1917, Borgnine was the son of Italian immigrants. His parents separated when he was 2, and his mother took him to live in Italy, returning after a few years.

Borgnine graduated from New Haven High School in 1935, then worked a few weeks as a vegetable truck driver before enlisting in the Navy as an apprentice seaman. He was discharged two months before the attack on Pearl Harbor and promptly re-enlisted. He spent the war as a gunner’s mate on a destroyer.

After his discharge, Borgnine returned home, unsure of what he was going to do.

Finally, his mother suggested he give acting a shot. After all, she told him, “You’re always making a fool of yourself in front of people.”

After six months of study at the Randall School of Dramatic Art in Hartford, Conn., on the GI Bill, Borgnine got a job at the Barter Theatre in Abingdon, Va., working behind the scenes before finally landing a $30-a-week acting spot in the theater’s road company.

“We kept 14 shows in our heads all the time,” he told Hollywood columnist Hedda Hopper in 1956. “We’d go from ‘John Loves Mary’ to ‘Much Ado About Nothing’ — what training! Dramatic school is OK, but the road is where you learn.”

He continued his acting apprenticeship over the next four years, including making his Broadway debut playing the hospital attendant in “Harvey.”

More stage work followed, supplemented by television appearances, including playing a villain on the science fiction series “Captain Video and His Video Rangers.”

Borgnine made his motion picture debut in 1951, appearing in three films: “China Corsair,” “The Whistle at Eaton Falls” and “The Mob.” But he was unemployed in New York when the call came to play his next film role: Fatso Judson in “From Here to Eternity.”

Borgnine made a convincingly menacing Fatso — so much so that when young Frank Sinatra Jr. saw the movie for the first time, Borgnine later told the Los Angeles Times, “He looked at it and said, ‘Dad, when I meet that man, I am going to kill him.’ And his father said, ‘No. When you meet that man, you put your arms around him and kiss him. He helped me win an Academy Award!’ ”

Borgnine was on location in Lone Pine, Calif., playing another menacing heavy, this time in “Bad Day at Black Rock,” when director Mann and writer Chayefsky flew up to have him read for the lead in “Marty.”

As Borgnine recalled during a panel discussion at the Lone Pine Film Festival in 1999, he met with Mann and Chayefsky in his hotel room.

“The very first thing when we started reading, Paddy Chayefsky said, ‘Hold it! Hold it!’ I said, ‘What’s the matter?’ He said, ‘You’re doing it with a Western twang.’ ‘OK,’ I said, ‘wait a minute.’ I threw off my hat, kicked off my boots and I went at it.

“Paddy was reading all the other parts and Delbert was stretched across my bed, listening, and we came to the part where my mother says, ‘Put on your blue suit or your gray suit and go down to the dance hall; there are a lot of tomatoes there.’ And I said, ‘Mom, you don’t understand. I’m just an ugly, ugly man,’ and I turned away and tears were coming out.

“And I looked back and Paddy Chayefsky had tears in his eyes and Delbert was wiping tears from his face, and inwardly I said, ‘I got it!’ ”

“Marty” proved to be both an artistic and commercial success.

Life magazine called Borgnine’s characterization of the lonely butcher who falls in love with an equally plain and lonely schoolteacher (played by Betsy Blair) “one of the most successful pieces of movie casting so far this year.”

New York Times film critic Bosley Crowther wrote that Borgnine’s Oscar-winning performance was “a beautiful blend of the crude and the strangely gentle and sensitive in a monosyllabic man.”

In the wake of “Marty,” Borgnine played an Amish farmer in “Violent Saturday,” a prizefight promoter in “The Square Jungle,” a rancher in “Jubal” and a Bronx taxi driver (opposite Bette Davis) in “The Catered Affair.”

But he was soon back in front of the cameras playing another heavy, this time the villainous Norse chief in “The Vikings,” a 1958 film co-starring Kirk Douglas and Tony Curtis.

“After ‘From Here to Eternity,’ I decided to steer away from heavies, but here I’m playing one again,” he told the Los Angeles Times at the time.

“I made the original decision after some young Bronx characters almost took me apart. ‘You’re the guy that killed Sinatra,’ a group yelled at me one day in New York, and it looked bad until I spoke soothingly to them in Italian — a language they understood. ‘Fellows, it was just a picture,’ I said. They were so intrigued that I spoke Italian, they let me go.”

Borgnine closed out the ‘60s with a memorable role in Sam Peckinpah’s bloody 1969 Western “The Wild Bunch” and later made numerous television guest shots as well as appearances in TV movies and miniseries.

In the short-lived 1970 series “Future Cop,” he starred with John Amos as veteran policemen whose new partner is a biosynthetic computerized android.

In 1995, Borgnine was back in series television playing a friendly, pasta-loving doorman on “The Single Guy,” which ran for two seasons on NBC. He also was the longtime voice of Mermaid Man on the animated TV series “SpongeBob SquarePants.”

Off-screen, Borgnine has been described as soft-spoken and affable — a simple, unassuming, average man.

When Borgnine received the Screen Actors Guild Life Achievement Award in 2011, his career in front of the camera had spanned six decades. And at age 94, the venerable actor was still going strong.

As he said in 2008 when he received a Golden Globe nomination for his performance as a retired song-and-dance man in the TV-movie “A Grandpa for Christmas”: “You die on the vine if you just sit down in a chair and get old. The idea is to get up out of the chair and go out there and hustle.”

Borgnine’s final role came earlier this year in “The Man Who Shook the Hand of Vicente Fernandez,” as a retired radio DJ with an unfulfilled dream of stardom who winds up in a nursing home staffed by Latin American immigrants.

Borgnine was married five times, including to actress Katy Jurado from 1959 to 1964, and briefly to Broadway musical star Ethel Merman in 1964.

In 1973 he married his Norwegian-born fifth wife, Tova, who became head of her own cosmetics company.

Besides his wife, he is survived by his children Nancee, Cristofer and Sharon Borgnine and David Johnson; six grandchildren; and a sister, Evelyn Velardi.

Services will be private.

One Response to Ernest Borgnine, who won Oscar for ‘Marty,’ showed comic side in sitcom, dies at 95