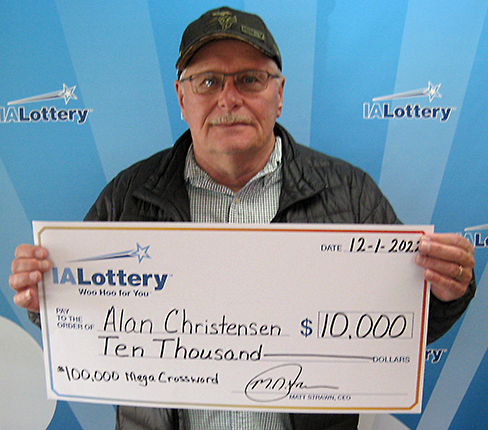 CLIVE — A northern Iowa man who won a $10,000 prize said that word of his win traveled fast.

CLIVE — A northern Iowa man who won a $10,000 prize said that word of his win traveled fast.

“Everybody in the county knows by now,” Alan Christensen said with a laugh on Thursday as he claimed his prize at the lottery’s Mason City regional office.

Christensen took the ticket home, and his wife, Christa, scratched it off. She thought they’d won $1,000 until they scanned the ticket with the Iowa Lottery mobile app.

Christensen, who has 18 grandchildren, said the win came at a great time.

“Christmas is coming,” he said. “We’ve got a lot of grandchildren. We plan on spending some on them.”