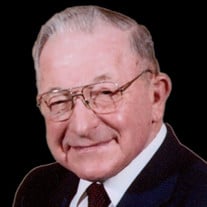 Frank Brcka, son of Edward and Rose (Jakoubek) Brcka, was born June 24, 1936, in Mason City, IA. He was a graduate of Garner High School’s Class of 1953. On June 20, 1961, Frank married Marguerite Erpelding, June 20,1961 at St. Michael’s Catholic Church, Whittemore, IA. Together the couple spent 61 happy years together. He served in the Army Reserves for six years. Frank began his work life being employed by Eymann Impl., Forest City, IA, and later managed an A&W in Fort Dodge, with his wife. He dedicated 31 years before retiring from UPS as a delivery driver. After purchasing and moving to a farm north of Plymouth, IA in 1969, he became more active in the agriculture community.

Some of Frank’s hobbies include collecting and restoring antique farm equipment, tools, and kitchen gadgets. He enjoyed dancing, threshing shows, and going on tractor rides. The best was when he was able to combine both passions and take his trailer with restored antiques to different threshing shows. A way he was able to give back was by volunteering at Hawkeye Harvest Food Bank, Mason City, IA. Frank was a member of the Catholic Workman, Branch 51, Duncan, IA.

Frank was preceded in death by his infant twin daughters, both of his parents, and his brother Ray.
The family would like to send their appreciation to those from North Iowa Hospice who took special care of Frank during this difficult time.