‘Men in Black 3’ censored in China 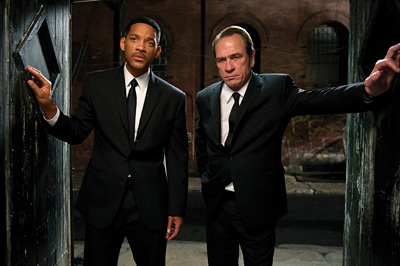 LOS ANGELES — “Men in Black 3” is the latest film to face the wrath of Chinese censors.

At least three minutes of Sony’s sci-fi comedy have been excised for its Chinese theatrical run, according to a person with knowledge of the matter who was not authorized to speak about it publicly.

The offending moments take place in New York’s Chinatown. They include a Chinese-restaurant shootout between evil aliens and Will Smith’s Agent J and Tommy Lee Jones’ Agent K — the aliens are disguised as restaurant workers — as well as a moment when Smith’s J “neuralyzes,” or memory-wipes, a group of Chinese bystanders.

A Chinese paper, the China Southern Daily, speculated that the latter scene may have been cut because it could be viewed as a comment on China’s censorship of the Internet.

The news was first reported in the English-language press by Britain’s Daily Telegraph, which pegged the total time of the cuts at 13 minutes.

“MIB 3” opened to more than $21 million in China last weekend, by far the largest total of any of the more than 50 foreign territories in which the movie bowed.

Chinese law limits the number of Hollywood movies that can be shown in its theaters, prompting studios to be unusually careful about any China-related content they include in their films. In this case, Sony learned of the Chinese government’s objections after the film had been completed.

This is hardly the first time a Hollywood movie has been altered for their mainland release. A moment in “Mission: Impossible 3” featuring laundry hanging in Shanghai, for instance, was removed before the film was shown in China. Scenes of the Hong Kong actor Chow Yun-fat playing a villain in “Pirates of the Caribbean: At World’s End” were also expunged.

Studios are sometimes proactive in removing scenes themselves. MGM changed in postproduction the nationality of villains in its upcoming “Red Dawn” reboot, digitally transforming them from Chinese to North Korean.

Sony is no stranger to working with the Chinese government. The company collaborated with the Asian nation on its 2010 reboot of “The Karate Kid,” which was shot in Beijing and other parts of the country and offered a generally positive view of life on the mainland — and starred Will Smith’s son, Jaden.