LOS ANGELES — While orbiting Earth at about 17,000 mph, SpaceX’s Dragon capsule came within 1.5 miles of the International Space Station in preparation for its historic hook-up scheduled for later this week.

The fly-by, confirmed by NASA in its webcast, is a critical step for the company, officially known as Space Exploration Technologies Corp., and its goal of becoming the world’s first private firm to dock a craft with the space station.

The Dragon’s onboard sensors and flight systems are undergoing a series of tests to determine whether the vehicle is ready to berth with the space station. The crew aboard the space station will monitor the Dragon’s fly-by and send a command to the cone-shaped capsule to turn on its strobe light.

Once the fly-under is complete, Dragon will fire its engines to begin a loop out in front, above and then behind the station in a racetrack-like pattern at a distance of four to six miles, the company said. This will set the spacecraft up for a re-rendezvous with the station the next day.

If all goes well, the crew will try to grab the spacecraft with a robotic arm in the pre-dawn hours Friday and pull it in for the historic docking.

Early Thursday, astronaut Don Pettit told NASA mission control in Houston that he was experiencing some problems with the space station’s cameras and onboard monitors, which are expected to play an important role in Dragon’s docking.

The issue is likely to be discussed at a press conference set to be webcast Thursday on NASATV at 10 a.m. EDT.

Pettit, however, did confirm that he saw Dragon near the station.

The Dragon was launched into space on Tuesday aboard SpaceX’s Falcon 9 rocket from Cape Canaveral, Fla., to start the demonstration flight to the space station.

SpaceX’s mission is considered the first test of NASA’s plan to outsource space missions to private companies now that its fleet of space shuttles is retired. SpaceX aims to prove to NASA that its Falcon 9 rocket and Dragon capsule are ready to take on the task of hauling cargo — and eventually astronauts — for the space agency.

(GRAPHIC: Detailed look at the mission and SpaceX Dragon spacecraft, which will be the first privately funded vehicle to rendezvous with the International Space Station; after delays, the mission, when launched, will last three weeks.) 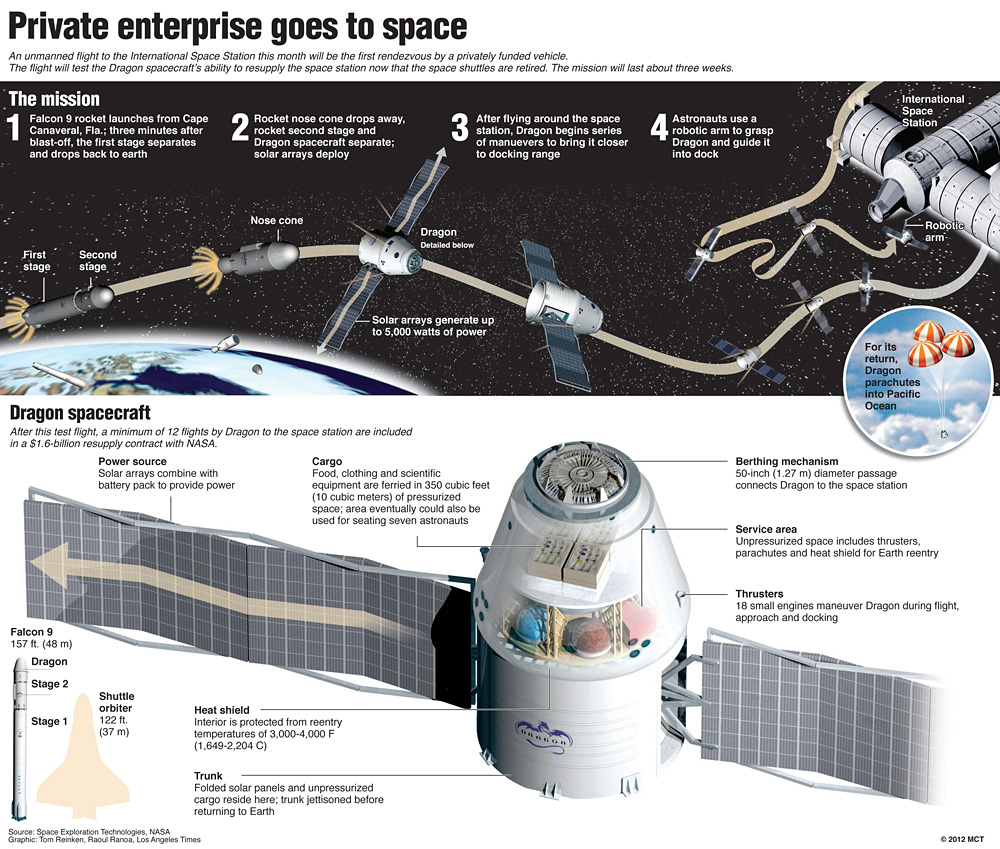