Jean Dujardin wins for best actor for ‘The Artist’ 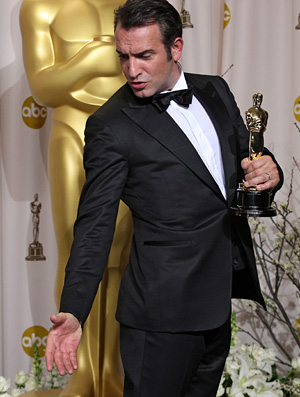 LOS ANGELES — Jean Dujardin was named best actor at the 84th Academy Awards on Sunday. Dujardin won for his role in “The Artist,” a black-and-white homage to the early days of Hollywood.

(PHOTO: Jean Dujardin with his Oscar for Best Leading Actor for “The Artist,” at the 84th Annual Academy Awards show at the Hollywood and Highland Center in Los Angeles, California, on Sunday, February 26, 2012.)

In the film, Dujardin plays silent film star George Valentin, who struggles with his place in a world of talkies, all while romancing the new face of cinema, personified by song-and-dance gal Peppy Miller (Berenice Bejo).

Though Dujardin was not a major star before this awards season, he’s a household name in France. He got his start through a one-man show, enacting the various characters he encountered during his military service.

Dujardin competed against George Clooney in “The Descendants,” Demián Bichir in “A Better Life,” Gary Oldman in “Tinker Tailor Soldier Spy” and Brad Pitt in “Moneyball.” The 39-year-old actor previously picked up ??the Golden Globe for actor in a motion picture comedy or musical.