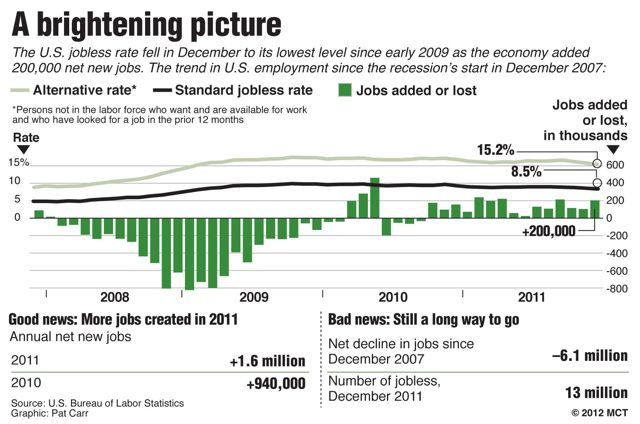 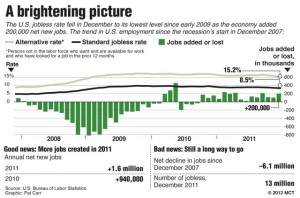 WASHINGTON — Can it last? That was the question everyone was asking after the Labor Department reported Friday that employers added 200,000 jobs in December and the unemployment rate fell to 8.5 percent.

The improvement on the jobs front is the latest sign that the U.S. economy is solidly on the mend. While shadows remain over the future — continued weakness in housing, Europe’s debt crisis and possible recession, and a slowdown in China — the U.S. outlook is brighter than it’s been in years. If this continues through the next 10 months — a big if — it could strengthen President Barack Obama’s chance of re-election.

Mainstream economists had expected job growth of 140,000 to 160,000, so private-sector growth of 212,000 was a surprise. The overall new-jobs total was dragged down by government layoffs, which eliminated 12,000 positions.

Healthy hiring numbers across a wide range of sectors heartened economists. Transportation and warehousing led all sectors with more than 50,000 hires, while hard-hit sectors such as manufacturing and construction posted gains of 23,000 and 17,000, respectively. Health care added almost 23,000 jobs. Retailers hired almost 28,000 workers

“You don’t have to be a rocket scientist to interpret today’s number, just check off the boxes: a pick-up in non-farm payrolls, another drop in the unemployment rate, a tick up in hours worked and a mild gain in hourly earnings,” Neil Dutta and Ethan Harris, top economists at Bank of America Merrill Lynch, wrote in a research note. “Today’s report extends the steady diet of solid economic data, and suggests the U.S. economy built up momentum as we closed out the year.”

Other analysts agreed, but added notes of caution.

“To get to 200,000 sustainably, month by month, we’ve got to see broader gains than that,” said Nigel Gault, the chief U.S. economist for IHS Global Insight, a prominent economic forecasting group.

“The job outlook is improving, but we aren’t home free. The European debt crisis remains a very serious threat, as is the foreclosure crisis and ongoing house price declines. Our daunting fiscal challenges could also derail us in coming months,” cautioned Mark Zandi, the chief economist for forecaster Moody’s Analytics. “Nonetheless, it feels like a self-sustaining economic expansion is kicking in.”

Zandi added: “Not only are businesses curtailing their layoffs, but hiring is also picking up. There is a long way to go to fully recover from the Great Recession, but we are on our way.”

The Bureau of Labor Statistics reported Thursday that the unemployment rate for November was lower in 351 of the 372 metropolitan areas from which it gathers data. However, on Friday the BLS revised the November jobless rate up by one-tenth of a percentage point, to 8.7 percent. That meant December’s unemployment rate was a two-tenths-point drop.

At 8.5 percent, the unemployment rate is the lowest it’s been since February 2009, Obama’s first full month in office. December also marked four years since the start of the Great Recession, which lasted from December 2007 to June 2009, according to the National Bureau of Economic Research, the official scorekeeper.

While Democrats hope that the jobless rate will continue to fall, economists think it might rise later in the year.

“We think these trends augur well for 2012 and we look for job creation of around 200,000 per month through the year,” wrote economists John Ryding and Conrad DeQuadros of RDQ Economics in New York.

RDQ warned, however, that as dejected workers resume looking for jobs, that’ll push up the unemployment rate later this year, which coincides with the presidential election.

One reason for a potential slowing is signs that the European economy is entering recession. That could reduce exports there from the United States and China — both engines of global growth — and weaken the U.S. manufacturing boom, which is spurring job creation.

Most forecasts see growth averaging about a 3 percent annual rate in the final three months of 2011 but slowing to around 2 percent for 2012. The uncertainty surrounding Bush-era tax cuts that are slated to expire at the end of this year also is expected to weigh on business hiring and investment decisions.

However, there are reasons to hope that the economy could surprise on the upside.

Speaking to the Virginia Bankers Association on Friday, Federal Reserve Gov. Elizabeth Duke pointed to recent positive readings on consumer confidence as laying the groundwork for a potential surprise later in the year.

“Indeed, an upside risk to my forecast is that consumers who postponed spending during the past few years could decide to unexpectedly take the plunge and make those purchases. For example, auto purchases seem to be especially good candidates for surprise as the average age of cars on the road indicates pent-up demand and credit is readily accessible,” Duke said. “Moreover, as households gain confidence that job and income prospects are improving, that should provide a further boost to spending and loan demand.”