Romney, Obama have competing ideas on how to bring school quality up, college tuition down 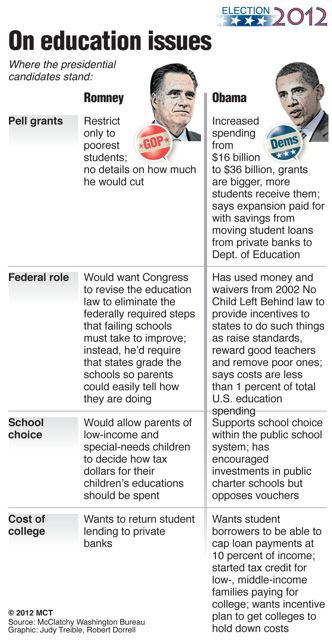 WASHINGTON — Should money for federal student grants for college be cut back?

Should parents be able to spend local tax dollars to pay for private schooling if they don’t like their public schools?

Mitt Romney and President Barack Obama agree that a good education for all Americans is essential for democracy, individual success and the national economy.

The areas where they disagree — such as on school choice and federal spending — make education another of the stark public policy choices in this presidential campaign. Their divide was evident Tuesday at NBC’s Education Nation Summit in New York.

In an interview for the summit, the president said that the big difference between them on education reform was paying for it.

Romney and his supporters “talk a good game about reform,” Obama said, “but when you actually look at their budgets, they’re talking about slashing our investment in education by 20 to 25 percent.”

Romney, speaking at the summit, said he would not support more federal spending for education but would leave that to the states.

“I think we all know what it takes to improve schools — invest in great teachers,” he said.

Romney has said during the campaign that a “world-class education” for American students was paramount to boosting the economy. His top reform would be a dramatic expansion of school choice.

Obama has called education a “gateway” to the middle class, saying the United States must be able to “out-educate and out-compete” every other nation.

He wants Congress to approve more spending for his key reform, Race to the Top, a competitive grant program that rewards schools that improve.

The nation’s needs for education improvement are plain.

Federal data show that a quarter of all high school students fail to graduate in four years, low-income students lag academically, and many students are struggling in reading and math.

But campaign spokeswoman Amanda Henneberg declined to provide details about where Romney would set the limits.

Under Obama, Pell Grants have more than doubled, from $16 billion in 2008 to $36 billion last year. The size of the grants increased, as did the number of recipients, from about 6 million to 9 million.

In addition, Congress passed an Obama-backed effort to remove commercial banks from the federal student loan business. The savings, in the form of subsidies that had been paid to the banks, paid for the increase in Pell Grants, Obama has said.

Romney and Obama also have different ideas about K-12 education.

The federal government provides about 10 percent of the money spent on K-12. State and local governments pay the rest.

The Obama administration has used money and waivers from the requirements in the 2002 No Child Left Behind education law to influence what happens at the state and local level.

The grants and waivers provide incentives for states to agree to improve school, like raising standards, rewarding good teachers and removing poor ones. They amount to less than 1 percent of what the nation spends on education, according to the Obama campaign.

Romney would urge Congress to revise the No Child law to eliminate the federally required steps designed to improve failing schools. Instead, he’d require that states grade the schools so that parents could easily tell how they’re doing.

Romney also would push Congress to change legislation to give parents of low-income and special-needs children the ability to decide how tax dollars for their children’s educations should be spent. Under his plan, parents could use their child’s share of public education funds to send their children to public charter schools or apply it to private-school tuition in states that permit vouchers.

Grover “Russ” Whitehurst, a Romney education policy adviser, but who was not speaking for the campaign, said that while Obama supports regulations, waivers and incentives, Romney favors a market approach to school reform.

“Give power to consumers of the service, in this case parents, and put them in a position to reward effective schools and teachers and punish the opposite,” said Whitehouse, director of the Brown Center on Education Policy at the Brookings Institution, a nonpartisan research organization.

Obama supports school choice, but only within the public school system. He has encouraged investments in public charter schools but opposes vouchers.

“They drain resources that are needed in the public schools — where the vast majority of students will always be,” said Obama campaign spokeswoman Lis Smith.

2 Responses to Romney, Obama have competing ideas on how to bring school quality up, college tuition down