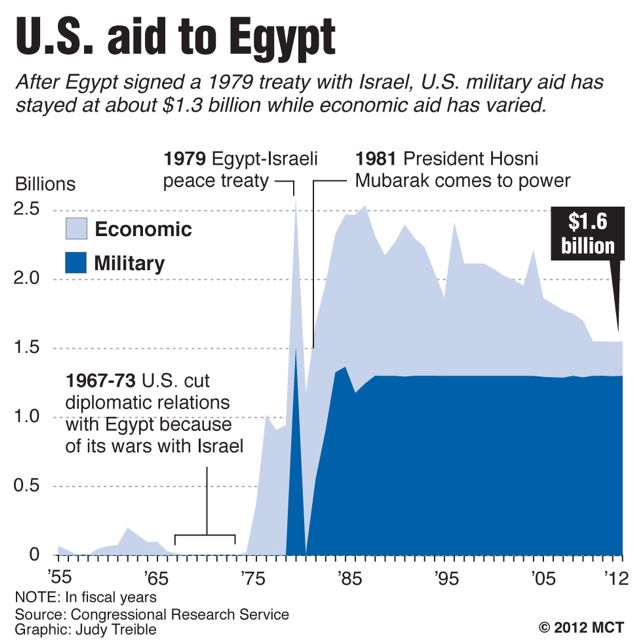 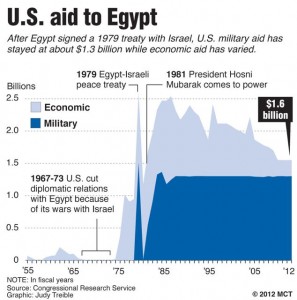 WASHINGTON — With $1.3 billion in annual U.S. military aid and a three-decade relationship hanging in the balance, U.S. officials said Tuesday that Army Gen. Martin Dempsey, the chairman of the Joint Chiefs of Staff, would travel to Egypt to press for the criminal charges against at least 16 American nonprofit workers to be dropped.

The visit later this week by the top U.S. military official likely represents the strongest leverage the United States has in its effort to get Egypt’s ruling generals to end a crackdown on American and Egyptian nonprofit groups. The White House and the State Department have unsuccessfully pressed the case with Egypt’s military council but no U.S. government department has worked more closely with the council over the years than the Pentagon has.

The Egyptians “are going to be told to lay off the (nonprofit groups) or the money won’t be forthcoming,” said a person familiar with the deliberations, who wasn’t authorized to be quoted because of the issue’s sensitivity.

Two Egyptian generals were scheduled to meet Tuesday in Washington with Sens. John McCain, R-Ariz., and Joseph Lieberman, an independent from Connecticut, but the Egyptians abruptly canceled the sessions and cut short their U.S. visit. McCain, in particular, has been extremely critical of the crackdown and has called for the entire U.S.-Egyptian relationship to be re-examined if the charges and a travel ban on the Americans aren’t lifted.

Privately, some U.S. officials have described cutting off aid as premature, saying that the threat, if overplayed, could harm long-term American interests.

However, in a phone call last week, Defense Secretary Leon Panetta told the head of the Supreme Council of the Armed Forces, Field Marshal Mohamed Hussein Tantawi, that Congress might cut off aid. Dempsey is expected to meet with Tantawi and with his Egyptian counterpart, Gen. Sami Anan.

Publicly, the Pentagon said Dempsey would be “consulting with friends. He is not delivering ultimatums,” said his spokesman, Marine Col. David Lapan.

But the long U.S.-Egyptian military relationship has been transformed since the ouster of former President Hosni Mubarak last year, with Egyptian generals seemingly willing to risk American funding to prove to the public that Egypt’s days as a puppet state are over.

Many Egyptians have long regarded the annual military aid package as a bribe to safeguard key U.S. interests — contain Islamist influence, uphold a peace treaty with Israel and keep the Suez Canal open to American warships — even when they ran counter to popular opinion.

The arrangement mostly ran smoothly for the 30 years of Mubarak’s authoritarian rule, until the uprising swept to power an array of new political forces that are eager to redraw the relationship. Analysts say the case against the American workers signals the emergence of a more assertive Egyptian military that’s seeking popular support by displaying what one commentator called “its anti-American credentials.”