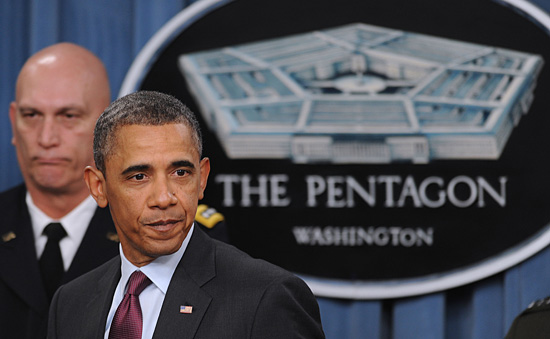 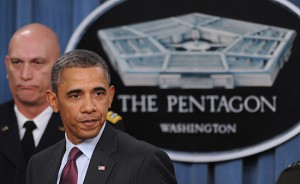 WASHINGTON — Outlining new military priorities after a costly decade of war, President Barack Obama called for shrinking the Army and Marines and refocusing Pentagon spending to counter dangers from China and Iran.

(PHOTO: President Barack Obama speaks about defense budget cuts during a briefing at the Pentagon in Arlington, Virginia January 5, 2012.)

Declaring that the “tide of war is receding,” Obama outlined the shift in strategy in a rare appearance Thursday at the Pentagon, underscoring the White House desire to pivot away from the unpopular and costly conflicts in Iraq and Afghanistan in an election year.

In a sign of concern about China, and a new emphasis on the Asia Pacific region, the Navy is expected to keep its current fleet of 11 aircraft carriers and accompanying warships. Some officials had suggested retiring one of the carriers as a cost-saving measure.

But the Pentagon is likely to limit purchases of the controversial F-35 fighter to 32 a year, delaying plans to ramp up production to save money. Still in development, the aircraft has been dogged by massive cost overruns and technical setbacks, but Pentagon officials consider the joint strike fighter vital for deterring China.

Flanked by Defense Secretary Leon E. Panetta and other senior military commanders, Obama vowed to “ensure our security with smaller conventional ground forces,” adding that the armed forces “will be leaner” but “agile, flexible and ready for the full range of contingencies and threats.”

The shrinking need for U.S. troops abroad is only one of the factors driving the administration to rethink military strategy. The other is the fiscal predicament that last year led the White House and Congress to agree to cut least at least $487 billion from military budgets — and possibly as much as another $500 billion if automatic cuts are imposed — over the next decade.

The White House sought to head off criticism from Republican presidential candidates that the coming cuts in spending will dangerously weaken U.S. defenses.

The GOP front-runner, former Massachusetts Gov. Mitt Romney, has sharply criticized Obama’s blueprint for the Pentagon, vowing to increase military spending if elected and charging at a recent debate that Obama is “cutting the capacity of America to defend itself.”

Obama’s aides argued that the new strategy and budget priorities — the result of an eight-month review — reflect America’s interests a decade after the Sept. 11, 2001, attacks, rather than random cuts that could undermine national defense.

“They can’t get away with their usual story about Democrats and national security,” one senior administration official said of Republican critics, noting that U.S. forces have killed most of al-Qaida’s core leadership, including the terrorist network’s founder, Osama bin Laden.

Obama said the Defense Department’s base budget will increase over the next decade. Only the rates of increase will shrink, along with spending on military operations in Afghanistan and Iraq. “The growth in the defense budget will slow, but the fact of the matter is this: It will still grow,” he said.

“We cannot afford to repeat the mistakes of the past — after World War II, after Vietnam — when our military was left ill prepared for the future,” Obama said.

The eight-page document made public Thursday does not specify which weapons systems or other programs would be cut or when. Those recommendations will be made public after the administration releases its fiscal 2013 budget in three weeks, officials said.

Congress has approved $662 billion in Pentagon spending for next year. That is $27 billion less than Obama requested and $43 billion lower than this year’s budget.

Under the new strategy, the military would no longer be required to be capable of fighting and winning two wars at once “against two capable nation-state aggressors.” That formal requirement dates from the Cold War, when the Pentagon worried about war breaking out on the Korean Peninsula and against Soviet military forces in Europe.

The two wars of the last decade led to a re-evaluation of that policy. Under the new guidance, the Pentagon would have to fight one major war while conducting a holding action in another conflict.

“Even when U.S. forces are committed to a large-scale operation in one region, they will be capable of denying the objectives of — or imposing unacceptable costs on — an opportunistic aggressor in a second region,” the review says.

The end of the Iraq war and the shrinking U.S. troop presence in Afghanistan means far fewer troops will be needed for manpower-intensive counterinsurgency operations and long-term occupations overseas, officials said.

The Army and Marine Corps “will no longer need to be sized to support the large-scale, long-term-stability operations that dominated military priorities” of the last decade, Panetta said.

He said the reduction in manpower should be carried out gradually so the services can “surge, regenerate and mobilize capabilities needed for any contingency.”

The strategy document argues that China and Iran are pursuing new military capabilities aimed at preventing the U.S. Navy and Air Force from operating near their shores or airspace, including cyber-warfare, ballistic and cruise missiles, and advanced air defenses.

“States such as China and Iran will continue to pursue asymmetric means to counter our power projection capabilities,” the strategy document argues. “Accordingly, the U.S. military will invest as required to ensure its ability to operate effectively” and counter these new capabilities.

To save money, the administration is also considering further reduction in the so-called nuclear triad, the ballistic missiles, bombers and submarines that carry nuclear weapons.

“It is possible that our deterrence goals can be achieved with a smaller nuclear force, which would reduce the number of nuclear weapons in our inventory as well as their role in U.S. national security strategy,” the document says.

“It is easy to emphasize Asia, technology and quality over quantity,” said Anthony H. Cordesman, a defense expert at the Center for Strategic and International Studies, a Washington think tank. But the terrorist attacks forced “an almost total reversal in every aspect of our strategy and plans.”

Some Republican members of Congress were quick to attack Obama’s plan.

Rep. Duncan Hunter, RpCalif., a member of the House Armed Services Committee, argued that the shift was unwarranted in the face of the combined threats of global terrorism, militarization of China and instability in Iran and North Korea.

“We really need to ask ourselves whether this is the right time for such a significant change in U.S. defense strategy brought on by such severe and disproportionate budget cuts,” Hunter said.