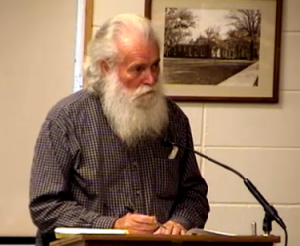 Phillip Flinchum tries in vain to plead his case to Mason City Council.

MASON CITY – Lawyers for the city of Mason City and embattled home owner Phillip Flinchum today agreed to a stay in the proceedings in his case against the city, which has decided to tear his house down.

Randy Nielsen for the city and Michael G. Byrne for Flinchum worked with judge James Drew to arrange the stay of proceedings. Drew indicated he would select a judge soon – likely not from Mason City – to preside over a full hearing, which has not yet been scheduled.  Lawyers for both camps will continue to make and build their cases, as well as gather information, until the full hearing.  The city cannot proceed to demolish Flinchum’s house until a judge makes a decision.

Flinchum hired a lawyer to defend himself against an aggressive move by the city council where it decided this summer that his house should be demolished. The city, however, had no report from an engineer stating the house was “structurally unsafe”, as city councilman Scott Tornquist had told a group of Mason City citizens, and can produce no evidence that an official inspection of the house was ever made. In fact, documents do not show that city officials have ever been inside Flinchum’s house.

In the city’s own words in documents submitted to NIT, the entire reasoning behind the demolition of the house states “Due to calls from neighbors about the condition of the property, the past history of nuisance calls and lack of response from Mr. Flinchum and because the property was not being used as a residence we proceeded with a Letter of Intent to Condemn.” (Read more here.)

McKinness Excavating was the low bidder for the demolition project, at a cost of $11,000 to taxpayers.