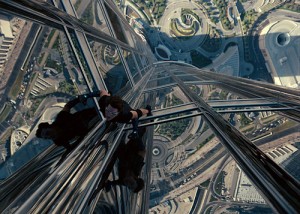 LOS ANGELES — It may be a season of good cheer, but around the studios the predominant mood this holiday was worry as seemingly surefire movies under-performed and the box office fizzled. Then came Tom Cruise.

After weeks of lackluster ticket sales, it was Cruise’s latest “Mission: Impossible” film that finally brought Hollywood the gift it so desired: a genuine hit.

“Ghost Protocol,” the fourth installment in the popular, big-budget franchise, grossed $46.2 million over the holiday period beginning Friday and ending Monday, according to an estimate from distributor Paramount Pictures. The movie — budgeted at about $145 million — debuted in limited release 11 days ago and has since racked up an impressive total of $78.6 million in ticket sales.

“When you saw how well the movie played on Christmas, you saw we were playing to a broad audience and that this was a movie everybody could go to together,” said Rob Moore, vice chairman of Paramount. The studio had debuted the film in limited release on 425 Imax and large format screens on Thursday Dec. 15 before opening it wide last Wednesday.

Noted Moore: “Word-of-mouth spreads so much faster than it used to, and we’re the beneficiaries of that with this movie since we got it out early to people last weekend.”

Things weren’t quite as rosy for other prominent sequels, however. Warner Bros.’ “Sherlock Holmes: A Game of Shadows,” which opened last weekend, claimed the No. 2 spot. The $125 million production collected a soft $31.8 million over the long weekend, bringing its overall tally to $90.6 million. Twentieth Century Fox’s $80 million “Alvin and the Chipmunks: Chipwrecked,” which has also been in theaters for two weeks, came in with a disappointing $20 million.

Both movies were expected to be big winners over the Christmas holiday, but each is so far lagging significantly behind their franchise predecessors in ticket sales. After 11 days in release, 2009’s “Sherlock Holmes” and the second live action-animation “Chipmunks” hybrid had each grossed over $140 million.

Studio executives behind both “Sherlock” and “Chipmunks” put the best face on the ticket sale slowdown. Jeff Goldstein, Warner Bros.’ executive vice president for domestic distribution, noted that the detective film saw the biggest bump in ticket sales of any of the top five films in release — 148 percent — from Saturday to Sunday. But he admitted it’s unclear whether the sequel will out-gross the original’s $209 million domestic haul.

“That story is yet to be seen,” Goldstein acknowledged. “I don’t believe we’ll actually hit that number, but we’re within that range.”

And Chris Aronson, Fox senior vice president of distribution, said “Chipmunks” could make up some ground as we head into “the meat of the holiday moviegoing season.”

Indeed, the week between Christmas and New Year’s is traditionally one of the busiest of the year at the multiplex. Hollywood is hoping business is strong, as ticket sales are still down about 4 percent compared to 2010, while attendance is off roughly 5 percent.

It is difficult to compare the most recent holiday weekend with the same period in 2010, because Christmas fell on a Sunday this year and many theaters closed early Christmas Eve. As a result, ticket sales through Sunday were down about 10 percent compared with last year, but up roughly 10 percent through Monday, a national holiday.

David Fincher’s highly anticipated version “The Girl With the Dragon Tattoo” — based on the first book in the trilogy by Swedish author Stieg Larsson that became an international phenomenon — did decent business. The Sony Pictures movie opened Tuesday night, and grossed $19.4 million over the holiday weekend, raising its overall total to $27.7 million. The violent, R-rated film had a budget of about $100 million, according to an individual close to the production, though a Sony spokesperson said the cost was $90 million.

“The Adventures of Tintin,” a 3-D animated family movie featuring a beloved Belgian comic book character, did not prove exceptionally popular with American audiences. Although the film has been a hit overseas, so far collecting more than $240 million abroad, it grossed only $16.1 million domestically over the long weekend. Since opening on Wednesday, “Tintin,” which cost Paramount and Sony between $150 million and $175 million to make, has sold $24.1 million worth of tickets.

Paramount, which is releasing the film in the U.S. and Canada, is hopeful that the movie will follow in the footsteps of last Christmas’ “Yogi Bear.” That family flick started slowly but ultimately grossed more than $100 million domestically.

Meanwhile, Spielberg’s epic “War Horse” fared better, debuting on Sunday and grossing $15 million in sales over two days. The film attracted an older audience, 31 percent of whom were older than 50. Those who saw the $70 million DreamWorks production liked it, assigning it an average grade of A-minus, according to market research firm CinemaScore. The movie appears to be resonating with audiences nationwide, as the top-grossing theater for the film was in Los Angeles and the runner-up was in Oklahoma.

Cameron Crowe’s “We Bought a Zoo” earned an even better grade — an A — but moviegoers did not show up in as large numbers to see the family drama. The movie starring Matt Damon and Scarlett Johansson, which cost Fox about $50 million to produce, opened on Friday and grossed $15.6 million through Monday. The film also appealed to an older demographic, as 59 percent of the crowd was age 25 or older, while 58 percent overall was female.

Of all the movies that opened on Christmas, the horror film “The Darkest Hour” was the least expensive, costing co-financiers Summit Entertainment and New Regency about $30 million to produce. But the early signs are not hopeful: It grossed only a weak $5.5 million over Sunday and Monday, and received a dismal C-plus CinemaScore.