Martin was sentenced in Sioux City by United States District Court Chief Judge Leonard T. Strand. Martin was sentenced to 180 months’ imprisonment. He must also serve a 5-year term of supervised release after the prison term. There is no parole in the federal system.

This case was brought as part of Project Safe Childhood, a nationwide initiative launched in May 2006 by the Department of Justice to combat the growing epidemic of child sexual exploitation and abuse. Led by the United States Attorneys’ Offices and the Criminal Division’s Child Exploitation and Obscenity Section, Project Safe Childhood marshals federal, state, and local resources to locate, apprehend, and prosecute individuals who sexually exploit children, and to identify and rescue victims. For more information about Project Safe Childhood, please visit www.usdoj.gov/psc. For more information about internet safety education, please visit www.usdoj.gov/psc and click on the tab “resources.”

Martin is being held in the United States Marshal’s custody until he can be transported to a federal prison.

The case was prosecuted by Assistant United States Attorney Ron Timmons and investigated by the Iowa Division of Criminal Investigation, the Federal Bureau of Investigation, and the Clay County Sheriff’s Office. 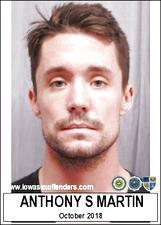