Minnesota public officials come to defense of group that helped stage rally at Mall of America, who may face criminal charges 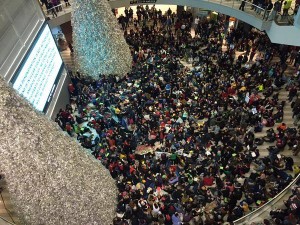 BLOOMINGTON, MN – The group “Black Lives Matter Minneapolis” could be facing charges for disrupting commerce and shopping at the Mall of America after a protest they arranged there last weekend, but some elected officials and others are defending the group.

According to reports out of the Twin Cities, Bloomington City Attorney Sandra Johnson is working on filing criminal charges against the group. She is working with mall officials to determine losses to stores that were incurred due to the protests, which took place at the mall’s rotunda.

Johnson has told other media outlets in the Twin Cities that she will try to force the “three or four” of the organizers to pay for all of the overtime Bloomington Police had to issue to keep the protest in check, but “there’s no way” she could get restitution for store owners who were forced to close down for several hours.

“This is more than trespassing. This is unlawful public assembly, public nuisance, one could argue it was riot in the third degree,” said Johnson.

As the run-up to these possible criminal charges unfolds, elected officials in the Twin Cities area are coming to the defense of Black Lives Matter Minneapolis. The group issued “thank you’s” to two officials who spoke out publicly in support of the rally and were critical of Sandra Johnson’s pursuit of charges.

“Thank you to (Minneapolis) council members Andrew Johnson and Alondra Cano for these statements of support in response to the (Mall of America) and Bloomington Attorney (Sandra Johnson’s) threats of prosecuting “organizers” for “reparations”.

Andrew Johnson:
People assembled in a de facto public space…
paid for in good part with public dollars…
where hundreds of assemblies happened before…
to peacefully express themselves as others have…
though without permission from a private foreign company…
who called out the Bloomington Police Department…
which overreacted…
broke out riot-gear…
scared customers…
partially shut down the mall…
unnecessarily impacted businesses…
…
and now the City of Bloomington is using taxpayer dollars…
suing organizers for forecasted sales that didn’t happen…
due to a partial shut down…
at the hands of the Bloomington Police Department…
which overreacted to a peaceful assembly…
in a de facto public space…
all in time for Christmas.
Yep, that about sums it up. Just because a covered pedestrian mall has been privatized doesn’t mean our rights shouldn’t extend to such a public space. In fact they do in several states. But until they do in Minnesota, I would expect a proportionate police response and city governments not to spend taxpayer dollars going after civil damages on behalf of private parties.

Alondra Cano:
I’m very concerned about the charges being sought against our community’s ‪#‎BlackLivesMatter‬ organizers in the latest ‪#‎MinnesotaNice‬ and ‪#‎ChargeMeToo‬ news. These charges reflect a philosophical challenge we must work hard to solve.
Should taxpayers be forced to give up all of their freedom of speech and freedom of assembly rights at the hands of privately owned yet heavily publicly subsidized business ventures?
I believe that it is fundamentally flawed for privately owned business ventures to dip into taxpayer dollars without any community benefits agreements that honor and respect the foundations of our American democracy.
This journey is not easy and it will be long, but we absolutely must keep standing up for the people’s ability to exercise their freedom of speech without persecution and personal harm.

Meanwhile, others have come to the defense of the group, as well.

This open letter was sent to City Attorney Sandra Johnson and MOA administration on Dec. 24, 2014 and was put together by a group of concerned faith leaders and clergy that came together to support the Black Lives Matter Minneapolis movement.

We are clergy members of many faiths who attended the peaceful gathering at the Mall of America on December 20, 2014 with #Blacklivesmatter. We attended this event with hundreds of members of our respective religious organizations and congregations. We attended with our children, our spouses, and our friends.

We went, in this busy holiday season, because we felt a religious and moral imperative to do so. The lives and deaths of black people matter to us. God calls us to stand with those who are dismissed, denigrated, and destroyed. We gathered in this season of peace and hope to lift our voices and pray for a day when people of color are not targeted by the police because of the color of their skin.
We were promised a safe, family-friendly, non-violent action and that is precisely what we experienced. While the gathered crowd sang, grieved, and remembered the dead, we prayed for safety for all, including the police, and we prayed for a day when the killing of unarmed black men and boys would end.

We were shocked and dismayed to see that the Mall of America did not believe the peaceful intentions of the peaceful gathering. We were stunned to see police in riot gear and extra law enforcement including state troopers present.

Many of us had made a day of it at the Mall, shopping and eating lunch and planning for more of the same after the witness event, but this was not possible with the Mall locked down. It is unfortunate that the Mall of America chose to spend so much money on additional security and law enforcement officials. It appears that you presumed that because we care about violence against unarmed black people, the event itself was going to be violent. This was not the case.

In early December, over 7000 people filled the same Rotunda in memory of one who died too soon to cancer, to raise awareness and money for cancer research.

Apparently there was no strong police presence, they were not met with police in riot gear, and no extra law enforcement officials called in. We, too, gathered to remember untimely deaths of unarmed black men and boys and to raise awareness of police brutality.

For reasons that are unclear to us, the Mall chose to respond to this second gathering in a completely different fashion, apparently presuming the worst of those who attended.

We are disappointed they would single out 3 or 4 young organizers of this peaceful demonstration. We find that to be disturbing and patently unfair given that thousands played a role in ensuring the success and safety in this nonviolent peaceful protest. If your office plans to charge young organizers of this incredible peaceful protest then we demand that you charge us too because we all played a role in the success of this peaceful event.

Here are the names below and we demand to be charged right along with the young organizers of Black Lives Matter. We also “conspired” to make this peaceful demonstration a success.

We encourage you to stop this attack on courageous young leaders. And refrain from using public money to pursue any case or file charges against the perceived organizers of this peaceful gathering, which was meant to make our community a better place for all people.

4 Responses to Minnesota public officials come to defense of group that helped stage rally at Mall of America, who may face criminal charges