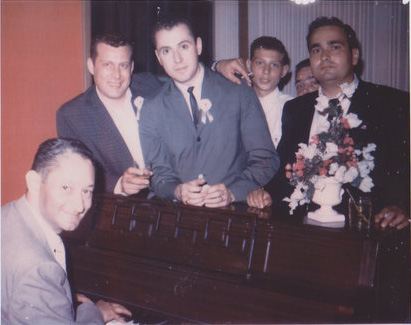 On Thursday we buried Vic; there were only a handful of us there. Both of Vic’s two sons along with their families were present. His son Scott drove in from Colorado and David came from Minneapolis. There were others who knew Vic, one who had worked for him, a young girl from the nursing home that cared deeply for him, in total maybe 20 had come to say goodby.

Soon after Vic died I spoke to David and asked why they were burying their father here instead of Colorado where his three brothers and parents are interned. I would have thought he would have wanted to be close to family. “He told me he wanted to be buried here,” David said. “My dad told me his best years were spent here, this is where he found success and developed strong friendships that endured over a half century.” David went on to say.

Today the remnants of those friendships were gathered together when crack of the 21 gun salute brought us back to the reality of why we were there. The Marine Honor Guard knew they were burying one of there own and it showed. Vic would have been proud. He wore a baseball styled cap day and night. He slept in it. Embroidered on the bill it said U.S. Marines.

Vic signed up during the Second World War…he lied about his age. When they put him on a ship to Japan he was only 17. I visited Vic as often as I could, more often than not accompanied by Nico Kotsopoulos whom was also close to Vic. I hated to see where fate had placed this once vibrant man; he rarely complained and if he did it was only because I asked.

Vic climbed into a car and drove here by himself…he was 82 and had not driven for 8 years. He needed to take the driver’s test and get insurance. Then one day he showed up. He had spent something like 8 years in an assisted living complex and hated every minute of it. During that time we spoke frequently and he loved to revisit the former time spent in North Iowa. I felt he wanted to spend his reaming days here with those of us whose fabric of life was inextricably woven together….a life bonded with a commonality forged in the womb where the the unmistakable scents in life that identify us, that aroma of olive oil and garlic that is interwoven throughout the Balkans and all other “olive oil” countries, opens the door to every home where that diet persists. It is the true tapestry of our lives. And when Vic first arrived here all those doors swung wide open…but this young man who was born on the iron range in Northern Minnesota to immigrant parents did not come empty handed. He brought with him gifts from the kitchen that he learned at his mother’s elbow. These were coveted and highly regarded by the local Orthodox community.

He personally taught me how to make Gnocchi that melts in your mouth, the correct ratio of flour to mashed potatoes….the egg that binds it. I learn from him how to make the base for the sauce that he sold more than once for $2,500.00 to others. In today’s dollars that would exceed $5,000.00. We canned Antipasto together in glass jars using the Green Mill kitchen. I learned how to make “home made’s” from Vic that were succulent and tender. His meat balls were without equal. Every time I went to Italy at every meal I compared the food to what I had eaten in Vic’s home….and Vic always won. If you think Vic only made pizza…you’d be wrong. Vic kept a towel in his hand while he cooked, and when he finished every thing was spotless, no drips or splashes to be found.

Vic once spent a month in my home, he was in a transitional period that ended up with his returning to Denver. But what nirvana had fallen on me….every night food from the Gods….I’ll never forget it. So now Vic slumbers here amongst friends that loved him, people of his own ilk who held him dear and opened their hearts to him as well as their doors. It is the story of our lives and the passing of our days. May his memory be eternal…..