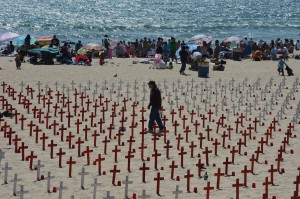 A man walks amid crosses on display at the Arlington West Memorial Project in Santa Monica, California. The beach memorial represents the 4,486 soldiers killed in Iraq and 1,984 killed in Afghanistan for a total of 6,470 dead in both wars. UPI/Jim Ruymen

WASHINGTON, March 15 (UPI) — There are complex challenges remaining for Iraq but the country is better off than it was under Saddam Hussein, a U.S. State Department spokeswoman said.

A series of reports critical of U.S. combat operations in Iraq have emerged as the 10th anniversary of the invasion approaches.

State Department spokeswoman Victoria Nuland said the bilateral relationship with Iraq is been challenging but important.

“The challenges are complex,” she said.

U.S. forces in 2003 invaded Iraq on the grounds that Saddam’s weapons program was too great of a threat to ignore. No such weapons were found.

Nuland said that bilateral affairs were more secure than during the Saddam era, however.

“Both countries have made enormous sacrifices to get us where we are and to start this new chapter but we’re committed to Iraq for the long term and we’re committed to its prosperity, its unity and integrity, and to its ability to be a strong democracy in the region,” she said.

16 Responses to Iraq better off after invasion, U.S. says