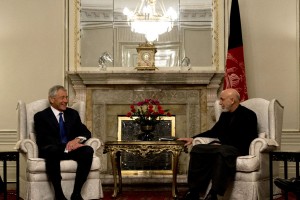 Secretary of Defense, Chuck Hagel, meets with Afghan president Hamid Karzai, March 10, 2013. Hagel is traveling to Afghanistan on his first trip as the 24th Secretary of Defense to visit U.S. Troops, NATO leaders, and Afghan counterparts. UPI/Erin A. Kirk-Cuomo/DOD

Stressing Afghanistan wants “good relations and friendship” with the United States, the Afghan leader told a gathering at the presidential palace the friendship “should be between two sovereign nations,” Khaama Press reported.

He cited as additional trouble points the resistance of Washington to transferring Bagram prison to Afghanistan, civilian casualties and the lack of transparency in the war against terrorism.

Karzai angered U.S. officials earlier this week with allegations recent Taliban attacks were “in support” of America’s continued presence in the country, creating a sense of insecurity.