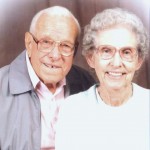 Mary Lois (Wilson) Laudner of El Cajon, CA, died November 24, 2012. She was born September 20, 1924 in Charles City, Iowa the daughter of May (Holtz) and Milton Wilson. Mary graduated from Mason City High school and then achieved a Bachelors and Masters Degree from San Diego State College. In 1944, Mary was a Meteorologist with the National Weather Service and was an English and Journalism teacher at El Capitan H.S. in the 1960’s. Mary Lou attended Holy Trinity Catholic Church in El, Cajon.

Delbert Dale “Scratch” Laudner of El Cajon, CA, died January 23, 2013. Delbert was born on March 6, 1924 in Greene, Iowa the son of Jonathan and Ruby Laudner. He graduated from the Rockford High School and then was employed as a machinist at Oliver Farm and Equipment Company prior to joining the Army in February 1943. Delbert served in the Army Air Corp during World War II and flew 36 combat missions as a tail gunner over the Balkans and Germany. After being shot down in a B-17, he spent 10 months as a prisoner of war in Poland and Germany, until his release at the war’s end. Delbert received several military commendations including four Bronze Stars, Air Medal

Distinguished Unit Badge, Victory Metal, and the Good Conduct Metal. When he was hitchhiking home unknown to two of his sisters, they picked him up to give him a ride outside of Mason City. What a reunion that was. Delbert was honorably discharged from his service November 14, 1945 with the rank of Staff Sergeant. He earned a Bachelor’s degree in Civil Engineering at San Diego State College and worked on Dam Projects in Tanzania, Nigeria and Puerto Rice in the 1960’s and 70’s. He worked as an inspector for the County of San Diego and as an independent contractor. Delbert retired from the Otay water district as the operations manager, and then served two elected terms on the Otay Water District Board. Delbert was a member of the Ex-POW’s Group and the Elks Lodge.

Mary Lou and Delbert were united in marriage on July 7, 1943 in Minnesota.  On July 25, 1945, they were reunited in a Catholic Church service in Washington D.C. They both lived in Minnesota and Los Angeles in the late 40’s before settling in El Cajon.  While Delbert was working on his Dam projects, they kept their home in El Cajon. They traveled extensively and attended several POW reunions in Europe. Delbert loved his gardens and took much pride in maintaining a beautiful lawn. Mary Lou was a wonderful cook and was known to can some pretty tasty vegetables from the garden. They both were philanthropists and donated land near Rockford, Iowa to the Rockford High School and created a nature preserve west of the Fossil Park in Rockford that they donated to Floyd County. Many summers they lived in Clear Lake where they owned several different properties, so they could be close to family and friends. Mary Lou and Delbert had a great love for each other and died one month and 29 days apart.

Memorial Services were held in California on Saturday, February 16, 2013. Final Inurnment will be at a later date in Riverside Cemetery, Rockford, Iowa.