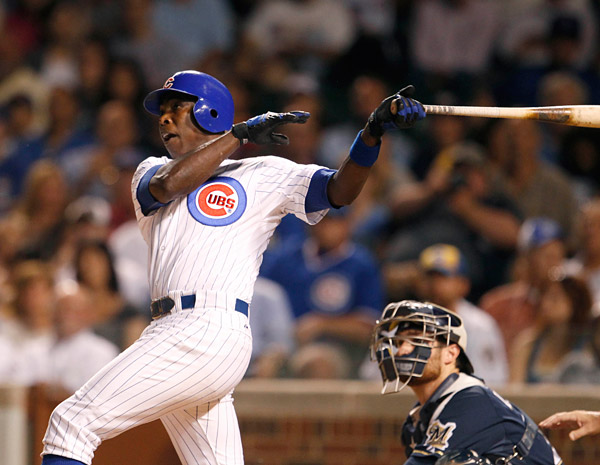 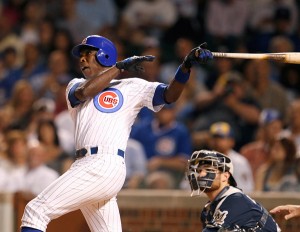 CHICAGO — After experiencing one too many white-knuckle ninth innings this season courtesy of an inconsistent bullpen, the Milwaukee Brewers’ offense took matters into its own hands Monday night against the Chicago Cubs.

Ryan Braun, Aramis Ramirez and Corey Hart hit consecutive home runs off Alex Hinshaw to open the floodgates, turning a two-run lead heading into the ninth into a nine-run explosion.

(PHOTO: The Chicago Cubs’ Alfonso Soriano follows through on an RBI double in the third inning against the Milwaukee Brewers at Wrigley Field in Chicago, Illinois, on Monday, August 27, 2012.)

By the time the fireworks had ended, the Brewers had blown through the Cubs’ bullpen and eliminated any mystery in what wound up being a 15-4 walkover at Wrigley Field.

“When was the last time you’ve seen one of those?” Brewers manager Ron Roenicke asked, referring to a blowout win. “Quite awhile.”

The victory was the sixth straight by the Brewers over the Cubs and 11th in 14 meetings this season. Milwaukee swept Chicago in a three-game series at Miller Park last week.

Leading, 6-4, Milwaukee sent 14 batters to the plate in the ninth.

Norichika Aoki got things going with a walk, and Rickie Weeks followed with a single to left to leave two on for Braun, who rocketed the second pitch he saw from the left-handed Hinshaw all the way out of the park in left and onto Waveland Ave. for his National League-leading 35th home run.

Then Hart joined the party, booming a long shot out to left-center that fell just a few feet short of also bouncing onto Waveland Ave.

Just like that, the Brewers had scored five runs to take an 11-4 lead, and had hit three consecutive homers for the first time since Sept. 9, 2007 against the Cincinnati Reds when Weeks, J.J. Hardy and Braun accomplished the feat.

“I don’t ever remember being a part of it other than the time we led off the game (in 2007),” Braun said. “It’s not going to happen very often, so you try to enjoy that moment when it does happen.”

Hart’s homer chased Hinshaw, but Milwaukee wasn’t done. Jonathan Lucroy walked and Carlos Gomez singled. After Lendy Castillo’s wild pitch moved them up, Segura reached on an infield single to score Lucroy and Gomez scored on shortstop Starlin Castro’s error on the play. Castillo finally got pinch hitter Cody Ransom to ground into the first out of the inning.

Aoki walked again, and after Weeks struck out looking, Braun singled home another run and pinch hitter Jeff Bianchi collected his first major-league RBI with a single to right off outfielder Joe Mather. That made it 15-4 before Martin Maldonado grounded out to end the inning to a sarcastic cheer from what remained of the crowd of 32,541.

Ramirez got the Brewers on the board in the opening inning, booming a double off the wall in left off Cubs starter Justin Germano that scored Aoki.

Chicago came back with three runs in the third, and all of them scored with two outs.

With David DeJesus on second base, Anthony Rizzo fisted an opposite-field bloop single into short left off the tip of Ramirez’s glove to make it 1-0.

Alfonso Soriano followed with a ringing double to center that at first looked to be the third out of the inning, but Gomez mistimed his leap at the wall and the ball caromed off his glove, allowing Rizzo to score.

Castro singled to right to plate Soriano, extending Chicago’s lead to 3-0. Marco Estrada then flirted with disaster by walking the next two batters to load the bases, but got himself out of the jam by striking out Darwin Barney looking.

Milwaukee responded with a three-spot in the fifth to grab back the lead.

Weeks got things going with a one-out single to center and scored on a double to left by Braun. One pitch later it was Ramirez’s turn again, as he smoked a two-run homer to left-center off Germano to make it 4-3.

Gomez added some insurance in the sixth when he singled to lead off the inning, stole second, tagged and went to third on a fly ball off the bat of pinch hitter Travis Ishikawa.

Aoki then scored him with a single to right off reliever Michael Bowden.

Kameron Loe, Estrada’s replacement in the bottom of the sixth, surrendered a leadoff homer to right by Brett Jackson — who came in hitting .206 — that got the Cubs within a run at 5-4.