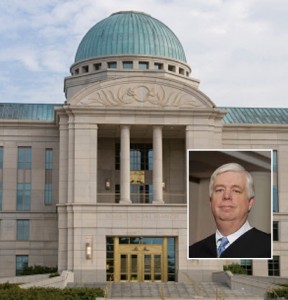 “This is about freedom, not just about marriage,” Vander Plaats said while unveiling Iowans for Freedom’s 2012 campaign. “We see this as a freedom and constitutional issue important to all Iowans. If courts are allowed to redefine the institution of marriage, every one of the liberties we hold dear is in jeopardy.”

Wiggins (pictured in front of Iowa Supreme Court in Des Moines) is one of four justices on the ballot, but is the only one who took part in a 2009 decision that led to the legalization of same-sex marriage in Iowa.

About 1,000 activists attended Saturday’s sold-out Family Leadership Summit at Point of Grace Church in Waukee. It was sponsored by The Family Leader, which Vander Plaats leads.

Brian Brown of the National Organization of Marriage pledged his group will match of up to $100,000 in contributions made in the next two weeks to help oust Wiggins.

Vander Plaats said Iowans for Freedom will reprise its 2010 effort, which succeeded in the defeats of then-Supreme Court Chief Justice Marsha Ternus and Justices Michael Streit and David Baker. All three were part of the 2009 decision.

“We will run a very focused and grassroots advocacy movement destined to produce similar or better results than the 2010 effort,” said Greg Baker, who will serve as the campaign’s executive director.

Campaign co-chair Tamara Scott said the effort had an advantage two years ago because mainstream political activists did not take the campaign seriously, but that won’t be the case this time around.

She said judicial branch officials already have launched a “dog and phony pony” tour of college campuses to “educate” Iowans about the court but she was confident Iowans would “vote with their hearts and their minds” again this November.

“I think last time we were somewhat underestimated. We knew it was a challenge. Never before in history had this been done. So I think many thought it was something noteworthy for the media but not likely to happen,” she said.

The pro-justices group Justice Not Politics issued a statement saying an Iowa State Bar Association survey issued last week indicated “every Supreme Court Justice on the November ballot is immensely qualified to continue their work preserving the rights and safety of all Iowans.”

“Supporters reject the vicious attacks from political extremists and value a fair court which protects the rights of every Iowa family,” the group said it announcing its “Champions of Justice” campaign. Supporters will spend the next three months trying to persuade voters to retain the justices.

Matt Sinovic of Progress Iowa, a member of the pro-justices coalition, said he expects there will be a strong grassroots effort to promote a fair and impartial court. The 2010 outcome “served as a wake-up call so people should be fired up this time around,” he said.

Wiggins ranked second-lowest among 75 Iowa judges in the bar association survey, with a score of 63.3 percent. Vander Plaats said that was a D minus, “even if you go to public school.”

The three other Supreme Court justices up for retention this year — Edward Mansfield, Thomas Waterman and Bruce Zager, whom Gov. Terry Branstad appointed to replace Ternus, Streit and Baker — each garnered retention support in excess of 90 percent.

“We’re not going after those three. We will know this effort is successful if we just vote out Wiggins but nobody else,” Vander Plaats said. “Iowans are intellectual, they’re savvy, they know what they’re doing. They voted out three, so I think Iowans this time will vote out Wiggins only.”

Vander Plaats again called for the four justices who participated in the 2009 ruling and are still on the bench to step down. He said he doubted that would happen, though, because they continue to exhibit “a thread of judicial arrogance.”

He paused to add, “It was one of the most exhilarating three hours of my life.”

While in Iowa last week, Democratic National Committee Chairwoman Debbie Wasserman-Schultz called the summit a collection of failed GOP candidates for president “who are all singing off the same song sheet and that song sheet is that we should make sure that people who are already doing very well can do even better. They have nothing to offer to Iowa voters.”