This news story was published on August 5, 2012.
Advertise on NIT • Subscribe to NIT 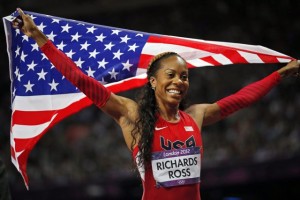 LONDON — Sanya Richards-Ross thought the gold was hers. But then, she has thought that before and been wrong.

In 2008, Richards-Ross was ranked No. 1 in the world only to finish third at the Olympics. So Sunday night, she refused to celebrate until the No. 1 was displayed on the scoreboard.

(PHOTO: USA’s Sanya Richards-Ross won the women’s 400 meter final during the Summer Olympic Games on Sunday, August 5, 2012 in London, England. Richards-Ross finished with a time of 49.55 seconds to take gold.)

The former University of Texas star kneeled down and waited for what seemed like longer than the 49.55 it took her to run the 400 meters.

“I was almost 100 percent sure I had crossed the finish line first,” Richards-Ross said. “When I was coming down the home stretch, I felt DeeDee (Trotter), but I didn’t feel Christine (Ohuruogu), so it wasn’t until the last lean that I realized that it was also Christine to my right. You never want to celebrate until you see your name on top. To finally have that moment and to see my name on top at the Olympic Games, it’s really hard to describe that feeling. I’m overwhelmed and just really excited.”

Once it was official, Richards-Ross broke into a huge smile, waved her hands, grabbed an American flag and began her victory lap. She had held off Ohuruogu, the home-country favorite and defending champion, and U.S. teammate Trotter in becoming the first American woman to win the event since 1984 and only the second ever.

It was a long wait to get here.

Richards-Ross was on the home stretch in Beijing, rounding the last turn with a 5-meter lead. It wasn’t a question of whether the world’s best quarter-miler would win Olympic gold but by how much and with what time.

Then, panic set in, along with a tight right hamstring, causing Richards-Ross to slip to third behind Ohuruogu and Jamaica’s Shericka Williams.

Four years ago, it was tears of disappointment she shed while talking to Ross on the telephone. This time, it was tears of joy as the National Anthem played in Olympic Stadium with Ross among the crowd of 80,000.

“I think it was definitely worth the wait,” Richards-Ross said. “I think I grew up a lot from 2008 to now, so I think I was better prepared to handle this moment.”

Richards-Ross, 27, didn’t run her fastest. She is the American record holder with a personal-best 48.70, and she ran a 49.28 in winning the U.S. Olympic Trials in June. But she was fast enough.

“It didn’t matter as long as she won,” said Clyde Hart, who trains Richards-Ross in Waco. “I don’t think she ran as tactical as she did in prelims, but I’m sure she got excited.

“In a week or two, you’ll probably see her run fast times when she’s out of the pressure situation.”

Despite losing the gold in 2008, Richards-Ross can become only the fifth female track and field athlete with four career Olympic gold medals. Evelyn Ashford is the only other American on the list.

Richards-Ross has gold medals in the 4×400 in 2004 and ’08 and should win another in that event this year. She also will run the 200, and has the second-best time in the world this year, but she isn’t likely to beat U.S. teammate Allyson Felix.

“I would be so excited to join such an elite group,” Richards-Ross said upon learning she has a chance at history. “I’m just living my dream.”

Richards-Ross’ victory completes the legacy of the 78-year-old Hart. The former Baylor head coach trained Michael Johnson, who won two gold medals and set the world record in the 400, and Jeremy Wariner, who won gold in the event in 2004 and is expected to anchor the 4×400 relay later this week despite finishing only sixth in the 400 at the Trials.

“Since Michael and Jeremy have been so successful, it’s only right I join that group just for him,” Richards-Ross said. “…When I went through the rough times, he never wavered. He always was kind of my rock. He kept telling me, ‘Be patient. Be patient.’ He has been instrumental in my success, and I definitely dedicate this medal in part to him.”

Ross won two Super Bowl rings in five years with the New York Giants. Richards-Ross had two gold medals and a bronze before Sunday, but they weren’t completely satisfying.