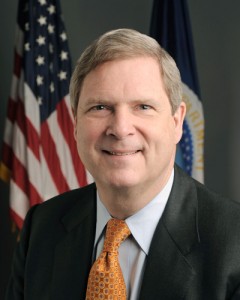 CEDAR RAPIDS – The so-called Farm Bill being debated by the U.S. Senate is “one of the most important pieces of legislation Congress will consider this year as it relates to the economy of Iowa,” U.S. Rep. Bruce Braley said in Cedar Rapids June 11.

However, with fewer members of Congress representing the declining rural population, he said at a Farm Bill listening post with USDA Secretary Tom Vilsack at Kirkwood Community College, it’s hard to put together the votes needed to pass the legislation.

Given the diversity of opinion on the proposal expressed by the 80-plus people who attended session, that hardly seems surprising. While there was general agreement on the need for passing a new Farm Bill before the current legislation expires Sept. 30, there was less consensus on what should be included.

It’s more than a “farm Bill,” Vilsack said, emphasizing the bill’s title — Food, Farm and Jobs Bill – that suggests the various goals of the legislation.

“The problem with just referring to it as a farm bill is that it speaks very directly to the 2 percent of the population that qualifies as a farmer,” Vilsack said. “But it doesn’t say much to the other 98 percent.”

Veteran and Kirkwood student made an emotional plea to Vilsack and Braley for more jobs and opportunity for his fellow returning veterans. He wondered if the Farm Bill could be used to help unemployed veterans “to get back to farming, doing something they are passionate about.”

“Sixteen percent of America’s population, nearly 40 percent of America’s military, comes from these rural areas,” he said. They do that because they’ve been raised with a value system “that respects and understands hard work and responsibility. One that also understands a very basic principle of farms: That you can’t keep taking from the land. You’ve got to give something back in order for it to continue to be productive.”

The importance of the conservation component of the Farm Bill –giving back and caring for the land — was talked up by farmers as well as representatives of Ducks Unlimited and Pheasants Forever. High commodity prices are encouraging some farmers to convert conservation acres to row crop production, according to Iowa Ducks Unlimited State Chairman Frank Mertz. He asked Vilsack and Braley, a Waterloo Democrat, to support “sodsaver” legislation aimed at protecting native grasslands.

There might be less pressure to expand and further concentrate ag land ownership and production if the crop insurance provisions of the Farm Bill weren’t so generous, said Jeff Klinge, a corn and beef farmers from Clayton County.

Subsidized crop insurance guarantees farmers an income, he said, and leads them to expand their operations in ways that hurt conservation efforts as well as rural communities.

“Acres are coming out of the (Conservation Reserve Program) and going into row crop production because there’s more money to be made,” Klinge said.

David Differding of Timeless Prairie Orchard near Winthrop just wishes he could get crop insurance for his dwarf apple trees. He can get insurance to cover losses from hail or other weather-related damage to his apples, but not his trees. If he has to replaces a tree, it takes four to five years before he can harvest apples.

“You can get insurance for a dairy cow,” Differding said. “Well, my dairy cows give apples.”

And Cindy Jones, who served on Vilsacks’ gubernatorial staff, spoke on behalf of food banks and the nutrition component of the Farm Bill. Nearly four-fifths of the $100 billion in annual spending under the proposed Farm Bill would go to nutrition programs, However, Jones said only 8 percent of those receiving food aid from the bill are food stamp recipients. Others are schoolchildren, seniors on limited income and the working poor.

After the session, Paul Sprecht of Monticello said it was ironic that so many Iowa farmers favored socialized crop insurance, but opposed socialized health insurance.