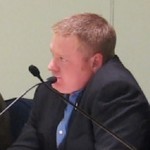 MASON CITY – At tonight’s City Council meeting, Police Chief Michael Lashbrook addressed the community and council on how his police department deals with crime and particularly the recent perceived crime outbreak in the city.

Lashbrook said the department is four officers down at this time and is working hard through a number of programs to battle crime in the city.

He said that the number one way to fight crime is through citizen participation and interaction with the department.

Mayor Eric Bookmeyer echoed this sentiment, when he told the public “Don’t be afraid of snitchin’.”

More on the Chief’s presentation, including the full video, coming soon.