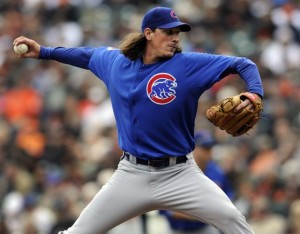 SAN FRANCISCO — There’s a friendly rivalry on the Giants pitching staff, one that comes to the forefront on the rare occasions that a relief pitcher gets an at-bat. In Monday’s 3-2 win over the Chicago Cubs, Jeremy Affeldt and the bullpen got the last laugh — barely.

Within the clubhouse, Affeldt’s eighth-inning ground out trumps Ryan Vogelsong’s three strikeouts. “That’s redemption,” Affeldt crowed, pointing at Vogelsong’s locker. “Right now I’m glad I didn’t strike out, which is what the starting pitchers have been doing.”

“I’m going to hear about it the whole way to San Diego,” Vogelsong said, shaking his head.

Hitting is about the only thing the pitchers can compete in these days, because on the mound they’re working in beautiful unison. Monday’s win, which clinched the Giants’ first sweep of the season, was the seventh consecutive game in which the Giants starter threw at least seven innings and gave up two or fewer runs.

That kind of dominance makes life easy on a banged-up bullpen that was called on for just 102/3 innings on the seven-game homestand.

Not coincidentally, the Giants went 6-1.

Affeldt threw two perfect innings in relief of Vogelsong, becoming the fourth different reliever in six games to be credited with a save. He made a winner of Vogelsong, the staff’s steely ERA leader who felt unusual pressure Monday morning when he realized the three starters before him had pitched into the ninth inning.

“You don’t want to be the weak link,” Vogelsong said. “It was definitely weighing on my mind a little bit. That’s a tough act to follow.”

That feeling wore away when he hit the mound and found what he called his “best all-around stuff” of the season. Vogelsong gave up two earned runs, both coming in the second inning when the Cubs singled five times.

He got some help on his final pitch of the day, when Ryan Theriot knocked a scorched liner into the air, barehanded it and threw to first to end the seventh inning and strand the go-ahead runner on third.

That was the highlight of another solid day defensively for the Giants, who have made just one error in their last seven games after committing 50 in their first 48 games.

“I was just hoping it was in my glove,” Theriot said. “My hand was numb because (Starlin Castro) hit it so hard.”

While the defense has improved, the Giants are still lacking one key element. They haven’t homered in their last 13 games at AT&T Park, which made Brandon Crawford’s RBI double in the second inning seem like a titanic blast.

The Giants went back to small ball after that; Buster Posey drew a career-high four walks and after two of them scored the tying and go-ahead runs on ground outs.

With the way the pitching staff is rolling, the three runs would be enough. The win put the Giants a season-high seven games above .500 as they boarded a flight to San Diego, where the last-place Padres await.

“You have to learn how to win,” Vogelsong said, “And right now I think we’re starting to do that.”

—Closer Santiago Casilla threw off flat ground before the game but was not available because of a bruised right tibia. Bochy said the Giants did not expect the injury to land Casilla on the disabled list.

Because of the run of success by interim closers, “We’re able to be a bit more cautious with (Casilla),” Bochy said.

—Down at the Giants extended spring training facility in Scottsdale, Ariz., Freddy Sanchez (shoulder, back) has started taking light swings, and Dan Runzler (lat strain) was scheduled to throw a simulated game Tuesday.