MASON CITY – A man originally charged with three Class “D” felony counts of delivery of marijuana received a deferred judgment after pleading guilty to one of the counts.

An arrest warrant was issued for, now, 23-year-old Kurt Arthur Tappe on January 3rd, 2012 by a Cerro Gordo County Magistrate after local law enforcement entered a criminal citation following a drug investigation. Law enforcement alleged Tappe had delivered marijuana during an investigation on the 15th, 16th and again on the 23rd of August 2011.

Tappe was arrested on the warrant by a Cerro Gordo County Sheriff’s Deputy in the 900 block of North Federal Avenue in Mason City on January 7th and was charged with one serious misdemeanor count of possession of marijuana after he was allegedly found with marijuana at the time of his arrest.

At sentencing on Tuesday, May 29th, presiding District Court Judge Rustin T. Davenport handed down a deferred judgment on the 1st charge of delivery of marijuana. As part of the deferred judgment Tappe must perform 40 hours of community service and will be on probation with the Iowa Department of Corrections for a period of three years. Judge Davenport also imposed a $750 fine, $401 in court costs, $200 dollars in restitution, and a $125 surcharge. The imposed fines and such were taken from the $1500 Tappe posted for bond following his arrest.

In the possession of marijuana charge from the day of his arrest on the delivery charges Judge Davenport ordered Tappe to serve 2 days in jail with time served and pay $50 a month until $310 in court costs and $125 in surcharges is paid off. Tappe’s drivers license was also ordered to be revoked for 180 days. 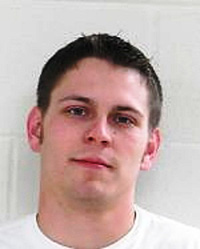