Obama says U.S. ‘will not hesitate to use force’ against Iran 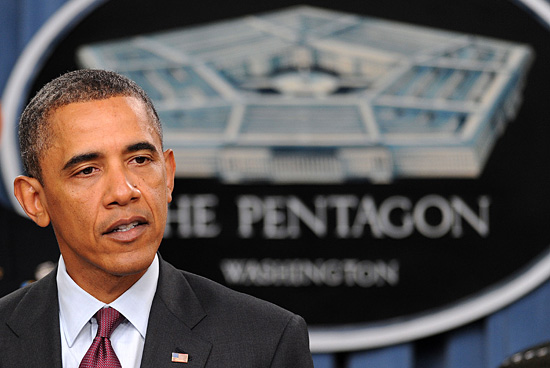 WASHINGTON — President Barack Obama on Sunday spoke of preparation by the American military to prevent Iran from obtaining nuclear weapons as he sought to assure U.S. supporters of Israel that he takes no options off the table in that effort.

But Obama also said that “too much loose talk of war” has benefited the Iranian government by driving up the price of oil, on which Tehran depends to fund its nuclear program.

Now is not the time for “bluster,” Obama said in a speech to the American Israel Public Affairs Committee.

“Now is the time to let our increased pressure sink in, and to sustain the broad international coalition we have built,” Obama said. “Now is the time to heed that timeless advice from Teddy Roosevelt: Speak softly. Carry a big stick.”

Obama offered a spirited defense of his record in Middle East policy, arguing that he has been on Israel’s side at every opportunity in the three years since he took office and made Israel’s security a top priority. No U.S. president has spoken so clearly, at such a difficult time, about standing with Israel before the United Nations, Obama said.

A day ahead of a scheduled meeting with Israeli Prime Minister Benjamin Netanyahu, though, Obama’s focus was on lowering the rhetorical temperature with regard to Iran. Aides say his aim at the Monday meeting is to persuade Netanyahu to give the sanctions time to work.

As the U.S. and Israel let their shared might speak for itself, Obama said, the message will come through.

The Iranian government will “know our resolve, and that our coordination with Israel will continue,” Obama said.

“I will take no options off the table, and I mean what I say,” Obama said. “That includes all elements of American power. A political effort aimed at isolating Iran; a diplomatic effort to sustain our coalition and ensure that the Iranian program is monitored; an economic effort to impose crippling sanctions; and, yes, a military effort to be prepared for any contingency.

“Iran’s leaders should know that I do not have a policy of containment. I have a policy to prevent Iran from obtaining a nuclear weapon. And as I’ve made clear time and again during the course of my presidency, I will not hesitate to use force when it is necessary to defend the United States and its interests.”

Even as Obama called for a dialing-down of the public threats, he also subtly reminded listeners that Israel has the power to act on its own.

“Make no mistake: We will do what it takes to preserve Israel’s qualitative military edge,” Obama said, “because Israel must always have the ability to defend itself, by itself, against any threat.”