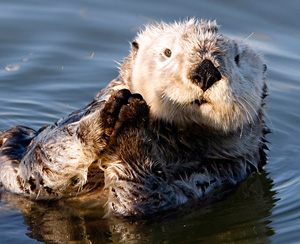 LOS ANGELES — After being brought back from the brink of extinction, sea otters are again in peril, with an unprecedented number of deaths along the California coast in the last year.

(PHOTO: In this January 3, 2009 file photograph, a California Sea Otter basks in the sun in the Moss Landing Harbor. )

The U.S. Geological Survey reported that 335 dead, sick or injured otters were found in 2011, a record high.

Shark bites accounted for 15 percent of otter deaths in the late 1990s, but that percentage nearly doubled in 2010 and 2011, Tinker said.

Sharks have long received some of the blame for the otter’s mortality rate, but the population has also been thinned by infectious diseases, boat strikes and gunshot wounds, among other factors.

“If these stressors remain high and shark mortality remains high, then there is no chance” for the population to regenerate, Tinker said.

Sharks seem to favor breeding-age female otters, he said, which could deliver more of a blow to the sea mammals’ numbers.

The last official population reported for the sea otter was 2,711, only 379 short of the threshold that would begin consideration for it being removed from the federal endangered species list.