MASON CITY – 22-year-old Jared Michael Kropf, who is currently awaiting trial in a willful injury case that occurred in Mason City last year, has been arrested on new assault charges.

Mason City Police had been searching for Kropf since Tuesday, February 21st, after receiving a report of an assault at 911 16th Street NE in Mason City. When police arrived Knopf had fled the scene, also listed as his home address.

Kropf was transported and booked into the Cerro Gordo County Jail at 4:19 pm and charged with obstruction of emergency communications and simple assault. He quickly posted the bond requirement and was released from custody.

Both new charges are simple misdemeanors punishable by up to a $625 fine and or 30 days in jail if convicted.

Court records show in addition to the new charges and the felony willful injury case Kropf was also charged in August on an aggravated misdemeanor count of concealing a knife used in a crime. Kropf has pled not guilty in that case and a trial is set for April 24th at 9am in Cerro Gordo County District Court.

The aggravated misdemeanor charge is punishable by up to a $6,250 fine and a maximum of two years in prison if convicted.

Court records show following the willful injury allegations Knopf was charged with a parole violation which he was found guilty of, but no sentence is listed as a result.

The Class C felony willful injury charge has been set for trial and continued for a later date one two occasions. It is currently set for March 27th at 1:30pm; however Kropf’s attorney Joel Yunek applied for a joinder in motion for continuance on February 16th that has not been addressed by the court. A joinder in criminal law refers to the inclusion of additional counts or additional defendants on an indictment.

A Class C felony if convicted is punishable by up to a maximum of ten years in prison.

Court records show Kropf is no stranger to the legal system with convictions for dealing marijuana, assault on a peace officer with a weapon, possession of cocaine, attempted burglary, 2nd degree criminal mischief, trespass with injury / damage, and voluntary absence escape, in addition to numerous probation and parole violations.   In the willful injury case, which occurred in May of last year,  one of the victims was seriously injured and required intensive care at St. Mary’s in Rochester.   Allegedly, baseball bats and crowbars were used in that assault. 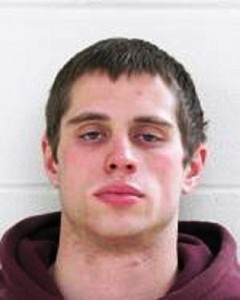