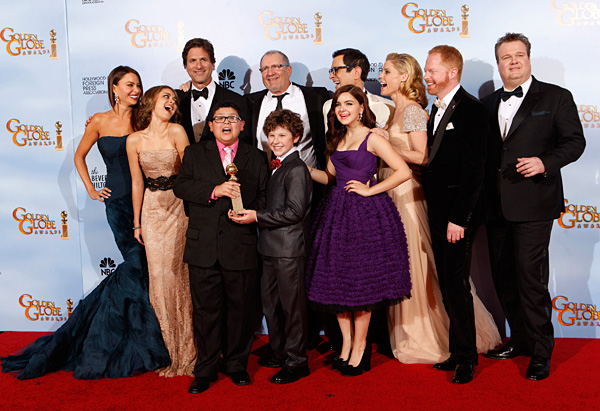 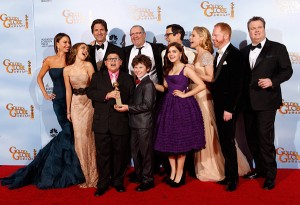 (PHOTO: The cast of “Modern Family” with their award backstage at the 69th Annual Golden Globe Awards show at the Beverly Hilton in Beverly Hills, California, on Sunday, January 15, 2012.)

Showtime’s counterterrorism thriller “Homeland” — which won as drama series and for Claire Danes’ turn as a troubled CIA agent — has set ratings records for the premium cable network. But it nevertheless draws fewer than 2 million viewers — a fraction of the ratings for a broadcast hit such as “NCIS,” which typically draws more than 20 million.

But for the most part, the Hollywood Foreign Press Association, which awards the Globes, chose to honor the little-watched, the prestigious or the foreign — or at least the last two, as in the case of the British period drama “Downtown Abbey,” which won in the miniseries category and has become a sensation for PBS.

In recent years, the Globes and the Emmys — much like the Oscars — have gravitated to niche fare and away from popular hits, which has led to complaints that the industry elite are increasingly fixated on esoteric programming and isolated from the preferences of most viewers.

Within the TV industry, the Globe choices are important because they can influence voters for the Emmy Awards, which are handed out in September, and also because they can help underperforming series get crucial exposure.

One genuine shocker came for Kelsey Grammer’s win for “Boss,” the well-received but little-seen political drama from Starz. The series opened to decent ratings — around 1.7 million watched the premiere in multiple airings — but the numbers have slid considerably since. The last time Grammer picked up a Globe, it was for his enormous NBC sitcom hit “Frasier.”

In the same vein, Matt LeBlanc, winless after nominations for “Friends” and “Joey,” won for Showtime’s little-seen “Episodes” in which he plays … Matt LeBlanc (or at least the TV version of the actor).

Another big surprise was Laura Dern’s victory for actress in the comedy category, for HBO’s “Enlightened.” The show, which has both its ardent supporters and fervent detractors, has drawn minuscule ratings so far, with just 210,000 total viewers tuning in to the premiere and it was uncertain whether HBO would renew it for a second season (HBO did).

However, Dern, the daughter of actors Bruce Dern and Diane Ladd, is a Globes favorite — she once served as Miss Golden Globes and previously won Globes for two HBO made-for-TV movies, “Recount” and “Afterburn.”

But a few actors went home with their first-ever Globes. Peter Dinklage won a supporting actor prize for HBO’s fantasy epic “Game of Thrones,” and Idris Elba won for an acting prize for playing the obsessive detective “Luther.”