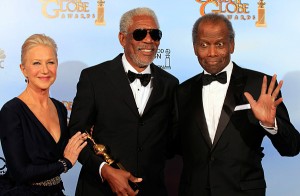 LOS ANGELES — Despite all his tough talk leading to Sunday night’s broadcast, it was a markedly respectful and restrained Ricky Gervais who showed up to host this year’s Golden Globes, leaving one to wonder why he bothered to take the gig at all (except for the money, of course).

After a performance last year that viewers found either ruthless and mirthless — or ruthless and hilarious — many were surprised the Hollywood Foreign Press Association asked the British comedian back. Yet as every entertainer knows, nothing sells tickets like controversy, and so the Globes launched an ad campaign playing off the idea of the comedian would be unmuzzled. Meanwhile, Gervais went on a media blitz explaining why last year’s show was, in fact, not offensive and why he would not be cowed by thin-skinned critics.

But actions speak louder than words, and though Gervais opened his monologue by taking a sip of beer and asking “So where was I?” he was surprisingly subdued. He preferred aiming his mild barbs mostly at institutions, though a few individuals did merit a mention.

Gervais observed that “the biggest British comedian was hosting the second-biggest awards show on the third-biggest network (NBC) … oh, wait, it’s fourth,” and claimed that the Golden Globes were to the Oscars “what Kim Kardashian is to Kate Middleton — louder, trashier, drunker and more easily bought.” In pursuit of satire, he read aloud the rules he was to follow — no profanity, no nudity, no smut or innuendo, no Mel Gibson jokes — which followed a quip about Jodie Foster’s “Beaver” (a film in which Gibson starred), which Foster seemed to take with good grace.

And then he vanished, reappearing only occasionally to introduce presenters. Toward the end of the show, he resurfaced to accuse fellow Brit Colin Firth of being racist and “punching small blind kittens.”

But even that was kindly meant, and other than Seth Rogen’s tasteless reference to his “enormous erection” (he was standing next to co-presenter Kate Beckinsale, mildly horrified, at the time) and Madonna’s endlessly self-referential acceptance speech, a surprisingly stately air surrounded a show that has gone out its way to play up its non-Oscar-like wacky and madcap (read: inebriated) past.

Of course, when your midpoint anchor is Morgan Freeman being feted by Sidney Poitier and Helen Mirren before accepting of the Cecil B. DeMille Award for lifetime achievement, you pretty much have to get on the dignity train or be cut in half by it.

Certainly first winner Christopher Plummer (supporting actor for the film “Beginners”) set a tone of elegance and grace, which was continued by early winners Laura Dern (lead actress in a television comedy for “Enlightened”), Julian Fellowes (best TV mini-series or movie for “Downton Abbey”) and Kate Winslet (lead actress in a TV mini-series or movie for “Mildred Pierce”). (When Idris Elba took to the stage to accept the award for lead actor in a miniseries for “Luther,” one did begin to wonder how many Brits it takes to screw in a Golden Globe.)

Real-life spouses William H. Macy and Felicity Huffman sang a surprisingly charming song to introduce nominees for supporting actress in a TV series/mini-series (won by “American Horror Story’s” Jessica Lange), and Rob Lowe covered nicely for a malfunctioning teleprompter, asking co-presenter Julianne Moore “When was the last time you did a cold reading in front of Steven Spielberg?”

In fact the only real jarring moment came when a State Farm ad aired, which has totally co-opted the “Cheers” theme song — didn’t they know Kelsey Grammer was in the room?

To those award-show haters who still mysteriously watch awards shows, it must have seemed a new level of hell. For better or worse, it was a show defined almost solely by its winners, which seemed in general more carefully considered than in past years. The small and insular voters of the Hollywood Foreign Press Association have, occasionally, been accused of simply sucking up to favored performers.

In television, especially, the honors went to people and shows that, though critically acclaimed, do not have huge audiences. Folks like Elba, Dern, Claire Danes (lead actress in a drama for “Homeland,” which also won drama series) and Peter Dinklage (supporting actor for “Game of Thrones”) are not exactly household names, and even the household names — Lange, Grammer (lead actor in a drama for “Boss”) and Matt LeBlanc (lead ctor in a comedy for “Episodes”) — won for shows that are not. “Modern Family’s” award for best comedy was the only truly mainstream win.

On the film side, things were a bit more pat. The little-seen “The Artist” took best comedy or musical, lead actor in same (Jean Dujardin) and score, but there was plenty of gold for the Usual Suspects — Woody Allen (who didn’t show)! Steven Spielberg! Martin Scorsese! Meryl Streep (who at least had the decency to forget her glasses so she stumbled a bit through her acceptance speech, proving that she is indeed human)! And finally, finally George Clooney got a lead actor award, for “The Descendants,” which also took best picture, drama.

Not much controversy there. Or anywhere really. Which leaves the Golden Globes in the same sort of conundrum as the Oscars — all dressed up and no way to put on a real show.