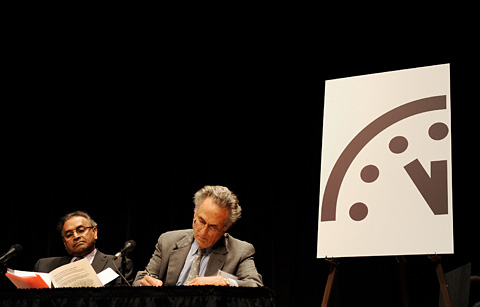 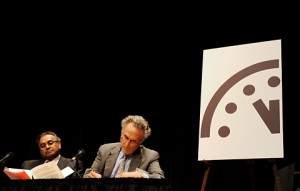 The hands on the face of the symbolic Doomsday Clock have been repositioned to five minutes before  midnight — signaling how close we may be to a global catastrophe unless we get our act together.

(PHOTO: The Bulletin of the Atomic Scientists has reset the “Doomsday Clock” to five minutes before midnight, as seen Tuesday, January 10, 2012 at the AAAS Auditorium in Washington, D.C. The decision on whether the minute hand moves backward or forward encompasses everything from nuclear weapons to climate-changing technologies to biosecurity.)

On Monday, the Doomsday Clock read six minutes before midnight. But on Tuesday, the Bulletin of the Atomic Scientists, self-tasked with informing the public about the pending threat from nuclear weapons, climate change and emerging technologies, decided to push the clock up a minute. It now reads five minutes before  midnight — in recognition of a growing nuclear threat and damage from climate change.

“Inaction on key issues including climate change, and rising international tensions motivate the movement of the clock,” Lawrence Krauss, co-chairman of the Bulletin of the Atomic Scientists board, said in a statement released Tuesday.

The statement added: “As we see it, the major challenge at the heart of humanity’s survival in the 21st century is how to meet energy needs for economic growth in developing and industrial countries without further damaging the climate, exposing people to loss of health and community, and without risking further spread of nuclear weapons, and in fact setting the stage for global reductions.”

The Bulletin was established in 1945 by the scientists and engineers who worked on the Manhattan Project, which created the atomic bomb. So the folks behind it are familiar with the effects of nuclear weapons — and the potential for overwhelming destruction.

The use of the symbolic clock dates back to 1947, when the Bulletin used the imagery on the cover of its magazine. The clock struck a chord with the public — at that time anyway. “The Clock has become a universally recognized indicator of the world’s vulnerability to catastrophe,” the group’s website says.

The clock’s hands have jumped around quite a bit over the years. It launched at seven minutes to midnight. In 1953, alarmed scientists pushed it up to two minutes before midnight in recognition of the U.S. pursuit of the hydrogen bomb. 1999 was a good year for the clock: The hands were pushed back to 17 minutes before midnight in the wake of the end of the Cold War. Since then, the clock’s hands have been in a near-steady march toward midnight.

“Two years ago, it appeared that world leaders might address the truly global threats that we face,” the scientists explained in a statement, adding, however, that “in many cases, that trend has not continued or been reversed.”

Now, the clock is back to five minutes before midnight.

The world still has about 19,500 deployed nuclear weapons, enough power to destroy the world’s inhabitants several times over, the scientists say. And unless global leaders throw their weight behind alternatives to carbon-emitting energy technologies over the next five years, “the world is doomed to a warmer climate, harsher weather, droughts, famine, water scarcity, rising sea levels, loss of island nations, and increasing ocean acidification,” the group says.