In rebellious Wukan, China, a rare sight: No authorities 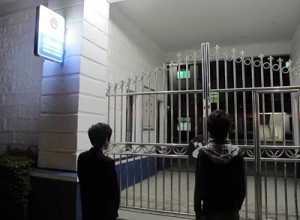 WUKAN, China — It’s the Chinese Communist Party’s nightmare in miniature: Locals stage protests against their land being taken away by shady real estate deals, police respond with heavy-handed tactics and suddenly, with years of frustration and allegations of official corruption bottled up, an entire village erupts in open revolt.

(Two men stand outside the now abandoned police station in Wukan, China, December 15, 2011, a village where officials and police have fled during a standoff between locals and police.)

That’s exactly what’s happened in Wukan, a fishing and farming community of some 20,000 people on China’s eastern coast.

The main road leading into town has been blocked by a police checkpoint on one end, and at the other by dozens of villagers manning a tall barricade of tree branches and boards with nails sticking out.

A McClatchy Newspapers reporter was able to slip into Wukan on Thursday night, apparently the first American news organization to do so, with the help of a local who had detailed knowledge of winding routes that skirted police positions in roads outside the village.

Village officials and police had fled the town, leaving government offices empty in the shadows of street signs.

The result is almost unthinkable in today’s China: A swath of land no longer under the direct management of the Communist Party and its functionaries.

“The government officials pushed us too far. We had to fight,” said an 18-year-old man surnamed Wu, who like many in Wukan didn’t want his full name used for fear of reprisals when the might of the state returned.

While the standoff at Wukan doesn’t threaten to spark wider unrest in China, the underlying issues are similar to those that have presented problems for the Chinese Communist Party across the nation.

In the village, as with much of China, people took pains to say they blamed immoral and greedy officials in the area, though they didn’t extend their criticism to central leadership in Beijing or the Communist Party as a whole.

The trouble in Wukan erupted, locals said, after years of unanswered petitions to provincial authorities asking for help adjudicating land grabs that they claimed were being orchestrated by village and neighboring city officials.

In September, a protest over land issues was met by a rush of baton-waving police officers.

Cellphone video footage showed villagers being kicked to the ground and pummeled. A crowd quickly formed at the police station and began destroying vehicles. In the aftermath, two officials were fired and authorities agreed to negotiate lingering problems with a group of village representatives.

It seemed that peace had returned. Then plainclothes security detained five of the village representatives last Friday. Two days later, one of them, a 42-year-old merchant named Xue Jinbo, died in custody.

Officials blamed a heart problem, and state media interviewed a medical expert who explained that the bruises on his body “might be related to handcuffs and the grabbing by prison officials while sending Xue to the hospital, and a large number of purplish spots found on the backside of the body are just normal discoloration from blood gathering after death.”

Everyone interviewed in Wukan was certain that Xue had been beaten to death. On Sunday, villagers drove back a large contingent of police and the lines were drawn.

There were worries about how long food supplies would last, but a few grocery stands were open with no sign of looting.

Standing outside the empty police station’s gates, a 17-year-old surnamed Lin explained that security officers in the village caused more trouble than they saved.

“It doesn’t matter that there are no police here,” said Lin, a thin youth wearing a black and white scarf. “When they were here, they had no sense of responsibility.”

Across China, displays of discontent with local governments — despite the best efforts of official censors — often tap into nationwide anger about issues such as corruption, income disparity and, more broadly, a growing sense that the country’s rulers and those linked to them are above the law.

The setting itself said much about the social complexities that threaten to chip away at the nation’s economic success of the past three decades. Wukan sits in Guangdong province, an epicenter of China’s manufacturing and export industry that’s seen several recent episodes of unrest.

On Thursday evening, men with walkie-talkies zipped around the village on scooters, relaying updates on one another’s movements and guard rotations at their checkpoint.

The father of one of the village representatives who was taken away and still not released, Zhang Shuimei, was discussing the situation with a group of friends. He carefully pulled out a small photograph of his son, Zhang Jiancheng, to show to a reporter: “He just wanted to get our land back.”

A man seated to his right, a 43-year-old with tobacco-stained teeth named Yang, who repairs motors on fishing boats, said: “To get our land back, we would have to buy it and we can’t afford that.”
The group got quiet for a moment as it digested the thought.

A 56-year-old carpenter named Huang Deping leaned forward in his chair and said that no matter what happened, “the point is not that they (officials) fled, the point is that we fought them until they left.”