ISU QB Hunter Dekkers completed 24 of 36 pass attempts for 219 yards and two touchdowns for the Cyclones.

TEAM NOTES
*Attendance: 56,109
*Sixth game this year with a 100-yard receiver, tied for the third-most in school history.
*Iowa State has won three-straight home games against West Virginia (42-6 in 2020 and 30-14 in 2018).
*Matt Campbell improves to 46-39 at Iowa State, including a 4-3 record against West Virginia.
*Iowa State has held every opponent this season under their season scoring average, as the Mountaineers entered averaging 34.4 points per game.
*Iowa State improves to 25-6 under Matt Campbell when holding the opponent under 20 points.
*Iowa State held West Virginia to 200 yards, the 12th-straight game holding an opponent under 400 yards of total offense.
*West Virginia’s 200 yards of offense was the second time (Iowa – 150) this year ISU has held a team to 200 yards or less. 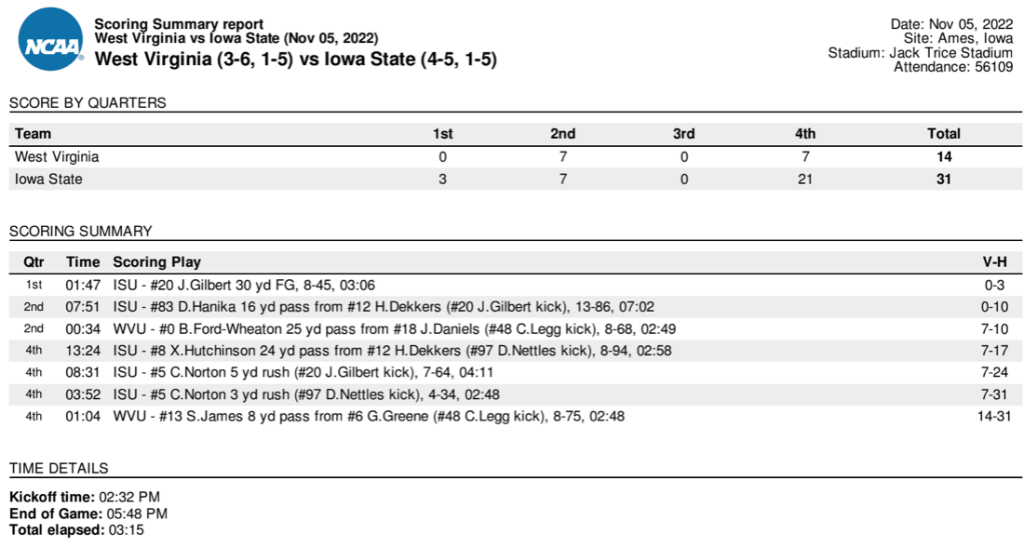 Hunter Dekkers
*Tied for eighth in school history with Brock Purdy (2018) for passing touchdowns in a season with 16. *Moves into seventh on the single-season completions list with 239.

Jaylin Noel
*His 27-yard rush on a reverse was the fifth-longest run by the Cyclones this year.

Deon Silas
*38-yard run in the third quarter was the longest of his career and the second longest by a Cyclone this year. *Finished with a career-high 77 yards rushing.

Cartevious Norton
*Finished with a career-high in rushing attempts (18) and rushing yards (69) for the second-straight week. *Rushed for his first career touchdown in the fourth quarter before adding a second on the next drive.

DeShawn Hanika
*Second quarter touchdown reception was his third of his career, with all three coming this season.

Anthony Johnson Jr.
*Made his 50th consecutive start, the longest active streak on the team.
*Tied with Chase Allen (2017-21) for the third-most games played in school history with 59. *Picked off his second career pass in the second quarter, with both coming this season.

Jace Gilbert
*Made his first 10 field goal attempts in Jack Trice Stadium, including a 30-yarder today, before missing (41 yards) in the third quarter.