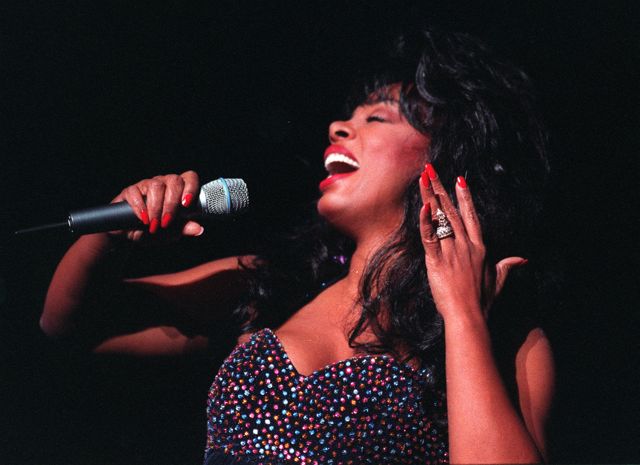 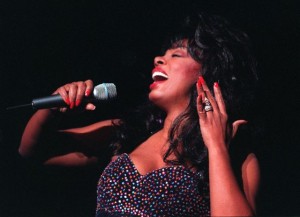 Donna Summer, 63, who earned the title Queen of Disco for her era-defining music but who transcended the genre over the years, died of lung cancer Thursday in Naples, Fla., her family said.

Summer had recently been in meetings at her Los Angeles home with producer Jay Landers. They had planned to work on an album of duets with contemporary dance acts she had influenced and, with Barry Manilow, an album of songs devoted to the Detroit music scene.

(PHOTO: Donna Summer performs at the Universal Amphitheatre in Los Angeles, California, August 4, 1995. The Queen of Disco died May 17, 2012 in Florida after a battle with cancer. She was 63.)

“She had the regal quality of a singer who transcends the genre they are best known for — a fancy way of saying she could really sing the phone book,” said Landers, a senior vice president at Universal. “We planned to invite some of the leading dance contemporary artists like Lady Gaga, Pink, Katy Perry, Madonna and others who Donna had cut a path for. I was totally floored when I read the news because she looked great and was in great spirits.”

Though Summer came to prominence just as disco was emerging from New York nightclubs in the mid-1970s, and came to define the glittery era with a string of No. 1 hits including “MacArthur Park,” “Hot Stuff” and “Bad Girls,” she was first inspired by Janis Joplin. Her debut album in 1974, “Lady of the Night,” revealed her rock roots. Though released only in Europe, the album paired her with Giorgio Moroder, a producer and songwriter with whom she would make musical history..

A year later, the two released the climactic and controversial disco classic “Love to Love You Baby.” Summer, then a stage actress in Germany, intended the song only as a demo for another artist to record. But the song, which was more than 12 minutes long and included a lengthy passage of simulated orgasms, became Summer’s first American hit when Casablanca Records founder Neil Bogart commissioned the track. He used it to help build his label on Summer’s soon-to-be inescapable sound.

Summer, however, came to regret the song when she became a born-again Christian in 1980 and edged away from disco as the genre imploded.

“I don’t sing it anymore,” Summer said in a 1996 interview. At the time, she was living in Nashville, where she composed “Starting Over Again,” a breakup ballad that became a country hit for Dolly Parton.

“I basically perform everything except “Love to Love You.” I’ve gone through dark periods and felt like I was in a cave. God has always been my center in getting me out of the cave. But I walked away when I did Love,” Summer said.

The singer continued to perform her subsequent single, “I Feel Love,” however, and that 1977 hit stands as one of the most influential songs of the decade. “I Feel Love” burst open the doors to electronic music.

“One day in Berlin … [Brian] Eno came running in and said, ‘I have heard the sound of the future,’” David Bowie said in liner notes for his “Sound + Vision” compilation. “He puts on “I Feel Love,” by Donna Summer. He said, ‘This is it, look no further. This single is going to change the sound of club music for the next 15 years.’ Which was more or less right.”

Unlike many stars of disco who faded as trends turned the word “disco” into a pejorative, Summer grew beyond the genre on albums like 1980’s “The Wanderer,” whose rock-dance sound would influence on Michael Jackson’s “Thriller” two years later. She had one of her biggest hits, and a memorable video, with “She Works Hard for the Money” in 1983, a tune that became an anthem for equality.

Born LaDonna Adrian Gaines, and raised in Boston on gospel music, Summer said the heady days of No. 1 albums and the constant pressure to follow one classic with another in the 1970s became too much.

“People don’t understand unless they experience it. Even euphoria has its limits,” she told The Miami Herald at a time when she was finding new fame as a painter while living in Nashville.

“I’ve sold close to $1 million worth in my short career,” she said in 1996. “I’ve sold more than Van Gogh and I sing better than they paint.”

Through the changes, and the genre-hopping that included two Grammy awards in 1984 and 1985 in the inspirational field, Summer still dominated Billboard’s dance charts. Her string of 19 chart-toppers from 1975 to 2008, the last one from her final studio album, “Crayons,” puts her second only to Madonna. She performed to a new generation on American Idol in 2008 and was still capable of selling out venues like Hard Rock Live in Hollywood as recently as 2010.

“She was wonderful in our venue,” said Bernie Dillon, Hard Rock’s senior vice president of entertainment. “She hadn’t been out in a few years, but came out in 2009 and we brought her back a year later, and she really rocked our house here. Over 5,000 people came and she’s still the Queen of Disco in all our hearts. She was really an icon back then and had an amazing impact on the music scene. As Elvis and the Beatles were to rock ‘n’ roll, you have to put her in the other categories. She’s up there.”

Her family, including her husband, Bruce Sudano; their daughters Brooklyn and Amanda; and her daughter Mimi from a previous marriage, said they “are at peace celebrating her extraordinary life and her continued legacy.”

“Words truly can’t express how much we appreciate your prayers and love for our family at this sensitive time,” afamily statement read.