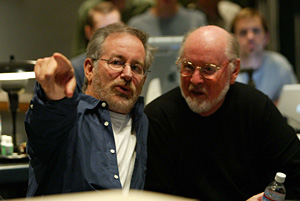 LOS ANGELES — The quietest room in Hollywood may be the office where John Williams composes. In a bungalow on the Universal Studios lot, steps from the production company of his most frequent collaborator, director Steven Spielberg, Williams works alone at a 90-year-old Steinway grand piano, with fistfuls of pencils and stacks of composition paper nearby, and worn books of poetry by Robert Frost and William Wordsworth piled on the coffee table.

(PHOTO: In this October 2, 2002 file photograph, director Steven Spielberg, left, and John Williams replay a scene in a movie with newly recorded music during a scoring session at Sony Studios in Culver City, California.)

“My relationship with Steven is the result of a lot of very compatible dissimilarities,” Williams said in a late December interview during a week that saw the U.S. releases of both of the duo’s latest joint efforts, the comic-book adaptation “The Adventures of Tintin” and the World War I epic “War Horse.” “Steven works with huge groups of people and is an international businessman. … This is the environment that I need. I don’t use a lot of — as my younger colleagues do — synthesizers and computers. When I started, that didn’t exist. … It is a labor-intensive, solitary business.”

Williams, who turns 80 Feb. 8, has penned the scores to 25 of the 26 feature films Spielberg has directed, a musically polyglot list that includes “Jaws,” “Close Encounters of the Third Kind,” “E.T.,” “Raiders of the Lost Ark,” “Schindler’s List” and “Saving Private Ryan.” (Producer Quincy Jones wrote Spielberg’s “The Color Purple” score.) The remarkably enduring partnership — between men who straddle two generations of Hollywood filmmaking and who met over a blind lunch date in 1972 — has yielded 13 Oscar nominations for original score, and some of the most recognized music in cinema.

At the time of this interview, Williams was polishing a quartet for the Boston Symphony Orchestra, which will celebrate his birthday this year with performances of his music by artists including cellist Yo-Yo Ma and opera singer Jessye Norman; he had just finished updating themes for the “Today” show and “Meet the Press”; in a few months, he’ll begin composing for Spielberg’s next film, “Lincoln.”

Unlike the giants of Hollywood movie music who preceded him — composers like Bernard Herrmann and Dimitri Tiomkin, who are identified with a distinctive sound — Williams has no discernible tells as a songwriter, beyond an emphasis on accessible melodies. That stylistic versatility has been the foundation of their partnership, according to Spielberg.

“John is much more of a chameleon as a composer,” Spielberg said by phone from the Virginia set of “Lincoln.” “He reinvents himself with every picture. The score to ‘Tintin’ could not be more dissimilar to his score to ‘War Horse.’ They fit the characterizations of the different movies. The ‘Tintin’ music is a rollicking adventure, an exhilarating ride downhill. He’s chasing the audience with his score. In ‘War Horse,’ he wrote music for the land … the period, evocative of the early 20th century.”

Born in New York, the son of a jazz percussionist, Williams moved to Los Angeles in 1948 when his father began playing in the Columbia Pictures orchestra. As a child, he took up the piano. “The only adults I knew were musicians, his friends, so I thought that’s what you did when you grew up,” he said. “It seemed to be an inevitable life path for me.”

He would go on to attend UCLA and the Juilliard School, and work as a studio pianist on scores by Jerry Goldsmith and Henry Mancini — it is Williams, credited as “Johnny Williams,” playing the indelible jazz riff on Mancini’s 1958 “Peter Gunn Theme.”

By the time Spielberg and Williams met in 1972, the composer had nearly 20 years of film and TV scoring behind him; he had collected an Oscar for adapting “Fiddler on the Roof” to the screen and had just scored a giant commercial hit, “The Poseidon Adventure.” Spielberg was a 25-year-old television director about to shoot his first theatrical feature. The young filmmaker had listened to a record of an Americana-style score Williams composed for “The Reivers” so many times that he had worn it out, and he wanted a similar sound for his feature debut, “The Sugarland Express.” At Spielberg’s request, a Universal executive arranged a meeting.

“Steven took me to a very fancy restaurant in Beverly Hills for lunch, in the days of these martini lunches,” said Williams. “It was like going with a teenager who had never ordered wine before and didn’t quite know what to do with the silver. He was so young, a little older than my children but not a whole lot. And seemed to know more about my music than I did. He would sing third themes from some remote Western.”

Impressed by the script and charmed by the boyish enthusiasm of its director, Williams agreed to work on the movie, and arguably the most successful film music partnership in Hollywood history was born.

“If you look at theirs in the larger context of director-composer relationships, you can look at Herrmann and Hitchcock, Fellini and Rota, Prokofiev and Eisenstein,” said film music historian Jon Burlingame, author of “Sound and Vision: 60 Years of Motion Picture Soundtracks.” “This collaboration really outpaces them all in terms of the number of films and the diversity of material.”