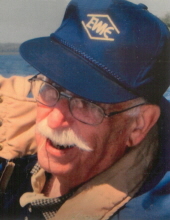 Harold Haus, 92, of Charles City, passed away Saturday, May 29, 2021 at the 9th Street Chautauqua Guest Home in Charles City.

A Mass of Christian Burial for Harold Haus will be held at 9:00 a.m. on Saturday, June 5, 2021 at Immaculate Conception Catholic Church with Reverend Tom Heathershaw officiating. Burial will follow with military honors at Calvary Cemetery in Charles City.

Visitation will be held on Friday, June 4, 2021 from 5:00 to 7:00 p.m. beginning with a Rosary led by the Knights of Columbus being prayed at Hauser Weishaar Funeral Home. Visitation will continue one hour before the Mass at the church on Saturday, June 5, 2021.

The love of his life was his beautiful wife Betty, and they were married for 65 happy years before her passing in 2019. The joys of his life were when he and Betty adopted David and Sandra, and of course he was really excited when Howard was born. To know Harold was to know that the most important loves in his life were his wife, his children, and his three wonderful grandchildren.

Upon his discharge from the Army, his father, a member of the Veterans of Foreign Wars, recruited him to join this organization. Harold soon became interested in the VFW and was Commander of the local VFW Post. He held many offices, including that of District 3 Commander and State Inspector. He was also very active in helping veterans. He served 9 years as a County Commissioner on Floyd County Soldiers and Sailors Relief Fund, served 9 years as a Commissioner for the Floyd County Veteran Affairs, and was a van driver for the VA Hospitals for many years.

Harold enjoyed his work as a Commercial Artist and was employed for 46 years at Salsbury Laboratories. He was also a talented artist in his private life as well. He was very active in his retirement and held offices in many organizations.

Harold was elected to the Board of Directors of the Family Community Credit Union, served as a Board Member and as President of the Credit Union from 1983 to 1992, and he was selected Member of the Year in 2004.

Harold was elected Grand Knight of Charles City Knights of Columbus Council 1409 in June 1990. He held this office for 3 years and it was during this time the Columbus Club was built at 502 W. Clark Street. Harold was District 5 Deputy from 1995-1999 and District 6 Deputy from 2003-04 and was awarded many honors including Top District Deputy.

Harold loved to fish, especially catching sunnies and crappies, and when he wasn’t fishing, he loved to talk about fishing. He was an avid camper and hunter of deer and pheasants, and he was a crack shot who taught all of his kids how to shoot. Harold was a huge fan of watching Westerns and always had a Louis L’Amour book open nearby. He was an outgoing man who loved a good joke, a good Black Velvet and water, and a good pork tenderloin. He loved meeting people and sharing a smile and a laugh. He enjoyed having coffee most days down at the Columbus Club with his buddy Jim and enjoyed catching up with the old Salsbury crew at coffee as well. He was incredibly kind with a huge heart and the best twinkly blue eyes, always quick with a hug and an “I love you”. He was so capable and great at so many things, but most of all he was great at being a doting husband, a proud dad and caring father-in-law, and a wonderful, loving grandfather.

Harold was preceded in death by his parents, his two brothers James and Richard, and his beloved wife Betty.

Should friends desire, memorials may be left in Harold’s name in care of his family.