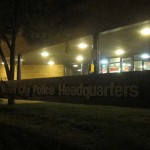 MASON CITY – UPDATE: A Mason City man who was reported missing since Friday has returned home.

According to Mason City police, Higgns’ family brought him to the PD Sunday night at 8:30 PM. He was cancelled as a missing person then. Higgins apparently had been at a church event all weekend and he forgot to leave word with his family where he would be.