This news story was published on March 14, 2012.
Advertise on NIT • Subscribe to NIT 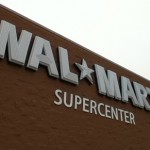 An officer was conducting a walk-through at 1:37 p.m. when he was given a counterfeit $20 bill by Wal-Mart security.  “The bill had apparently made it through the checkout and was in the deposit,” the officer stated in the media report.

Police had no suspects.

Anyone with information should call the Mason City Police Department at 641-421-3636.

One Response to Counterfeit money discovered at Wal-Mart