CEDAR FALLS – The UNI men’s basketball team moved to 10-2 in the MVC and 21-3 overall after Wednesday’s 83-73 win against the Drake Bulldogs in front of a sell-out crowd in the McLeod Center.

Drake moved out to 8-0 lead before the Panthers answered with a field goal of their own. The Panthers would fight back and take a one-point lead with 7:26 remaining in the half but were unable to slow the Bulldogs offense. UNI trailed the Bulldogs 39-35 at half, with the Bulldogs shooting 64% from the field in the opening 20 minutes while the Panthers converted on 42.9% of their field goal attempts.

AJ Green led all scorers with 13 points at halftime. Green finished 4-10 from the field and made all three of his free throw attempts. Justin Dahl led the Panther rebounding effort in the first half, hauling six rebounds. Dahl added two points, two assists and one block in the first half.

Sophomore AJ Green sparked the Panthers and the McLeod Center in the second half, finishing with 21 second-half points. Green went 8-11 from the field while making four second-half three-pointers. Green would finish the game with his second-highest point total, scoring 34 points and leading the Panthers with three assists.

Trae Berhow finished with 18 points, hitting 4-8 of his field goals. Berhow hit 7-8 of his free throw attempts, setting a new career-high. Spencer Haldeman had a perfect night on the floor, going 3-3 from the field, 2-2 from beyond the arc and made all four free-throw attempts.

KEY STATS
The Panthers remain undefeated at home going 13-0 in the McLeod Center.
AJ Green finished with 34 points, going 12-21 from the field and 6-9 three.
Trae Berhow added 18 points going 4-8 from the field and 7-8 from the free-throw line.
Spencer Haldeman was perfect from the floor.
Panthers played in front of a sellout crowd of 6,497.

UP NEXT
The Panthers will now look ahead to the Redbirds of Illinois State. The Redbirds are 7-16 overall and 2-9 in the MVC. The Panthers and Redbirds played back on December 31st with the Redbirds walking away with the 76-70 victory. The game will tip-off at 7 p.m. on Wednesday, February 12 and can be viewed on ESPN+. 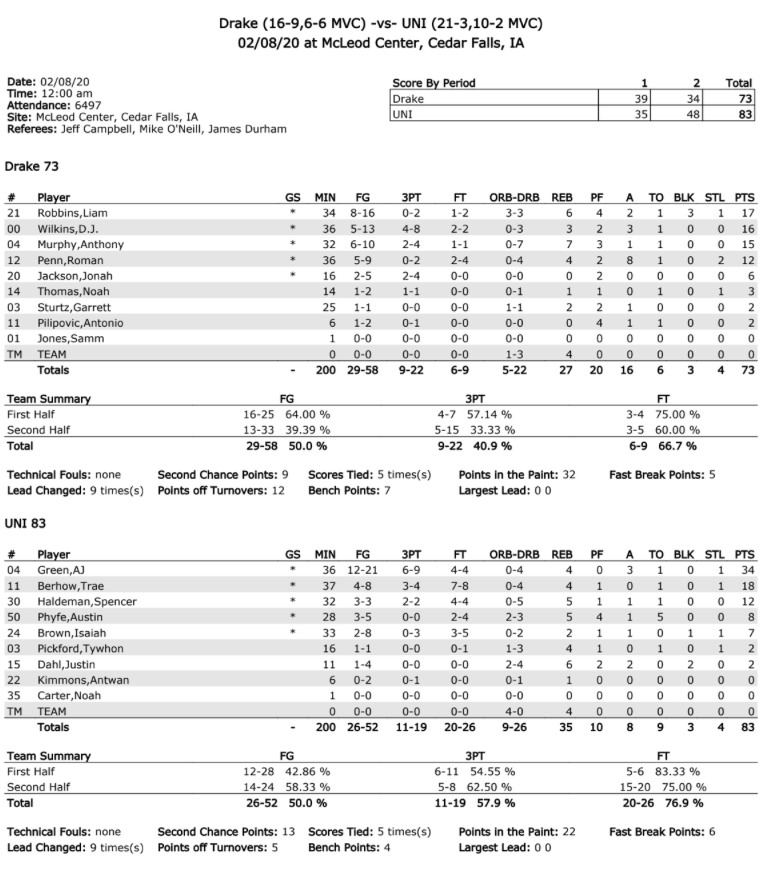