This news story was published on November 9, 2011.
Advertise on NIT • Subscribe to NIT

MASON CITY – The Mason City Firefighters Association, Local #41, and the City of Mason City are trying to finalize a labor agreement.

It was said that the negotiations have been on-going for some time, no word on the exact length of time.  The City has been “slow responding,” a union rep told NorthIowaToday.com.

The firefighters are asking for a pay increase of about 2%.

Much of the new contract the union presented to the City is language changes and few upgrades, for instance the pay increase, changes to how overtime is compensated, and bereavement leave.  “One firefighter’s dad passed away, and the funeral was on the fifth day and he was not allowed he day off.  He had to find a replacement,” a firefighter representative told Brent Trout, representing the City.

Trout accepted he union’s proposal sheet and told the union reps that the City would look it over and bring back a counter proposal.

Trout mentioned during the meeting that the City would like to see it done before next year’s budget is completed.

Trout also told NorthIowaToday.com that the City is negotiating contracts with the Police and AFSCME at this time. 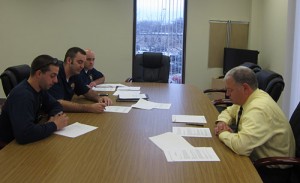