Every year, Cedar Falls plays host to a very special game of college football. The annual Shrine Game – or Shrine Bowl – features the best players from the North of the state against an all-star team selected from the South.

The 2019 version of the event at the UNI Dome was won by the team picked from players from the South of Iowa. Let’s take a look at everything else you need to know about this historic game. 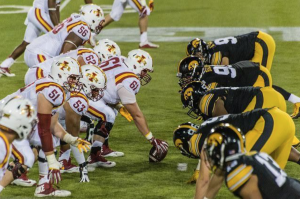 The History Behind the Game

The 2019 Iowa Shrine bowl was the 47th time that this all-star game has taken place. It is a showcase for the state’s most talented pre-college football players. They are nominated for the event by coaches, with the two teams selected according to a north-south line dividing Iowa.

The very first game of this type in the state happened in 1973. It was held in Iowa City and was inspired by the success of other Shrine-sponsored games held across other states in the country.

The teams are made up of 46 graduating High School Seniors in each squad. How do they decide which players represent North and which are from the South? The dividing line used is Highway 30 as it runs across Iowa.

In fact, at the start both basketball and football games were included. However, the first year ended in a financial loss and basketball was dropped from future years. From 1974 onwards, it has been financially successfully with all of the profits going to charity.

One of the most noteworthy facts is that this event has been hugely effective in raising funds for charity. In fact, it has been noted that, to date, more than $2.5 million has been raised for The Shriner’s Hospitals for Children through the sale of tickets, advertising, sponsorship, and other sources of income.

This year’s event is said to have raised its target of some $100,000. This charity aspect is one of the reasons that the players who take part in the Shrine Bowl often call it a very special occasion and one of the greatest games of their lives. It is worth remembering that the Shriners have 18 orthopedic hospitals, 3 burn centers, and another that is used for multiple needs.

Including this year’s impressive victory, the South now holds an overall series lead of 24-22-1. Indeed, they have now won 10 of the 14 most recent games. It would seem as though betting on the South is one of the best college football bets just now, but maybe next year will see the North hit back. Still, it is a great opportunity to scout some future stars in the NFL future markets.

The final score was a relatively comfortable 24-13 victory for the South over their Northern rivals. A strong start by the Southern all-stars saw them surge to a 17-0 by halftime. They then stretched their advantage to 24-0 in the third quarter before the North managed to reduce the difference towards the end.

One of the stars of the show for the South was linebacker Landon Green. He recorded three sacks and later revealed that it might be last ever game, as he opts to join the US Army rather than seek out a career in college football.

The South’s quarterback, Beau Cornwell, finished the game with 7 completions from 9 attempts, with a total of 81 yards, one touchdown, and a single interception.

What Does the Future Hold?

It is clear that this event holds a very special place in the Iowa sporting calendar. The fact that it produces much-needed funds for charity as well as a great day out means that the Iowa Shrine Bowl should continue to be a much-loved game every year.