This news story was published on September 25, 2012.
Advertise on NIT • Subscribe to NIT 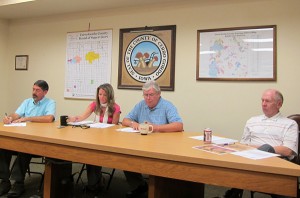 A general road report was given by County Engineer Mary Kelly.

County Auditor Ken Kline spoke about the successful Precinct Atlas software.  Precinct Atlas was developed by programmers employed by Cerro Gordo county and has now won awards and been mentioned in media publications (see video).  He said that 57 counties are now using the software for elections in one way or another, with 51 counties fully implementing. Kline said that on Wednesday Polk County, the largest in Iowa, will launch their absentee voting and will be implementing Precinct Atlas.  Kline will travel there for that announcement.

A liquor license was renewed for PM Park in Clear Lake.