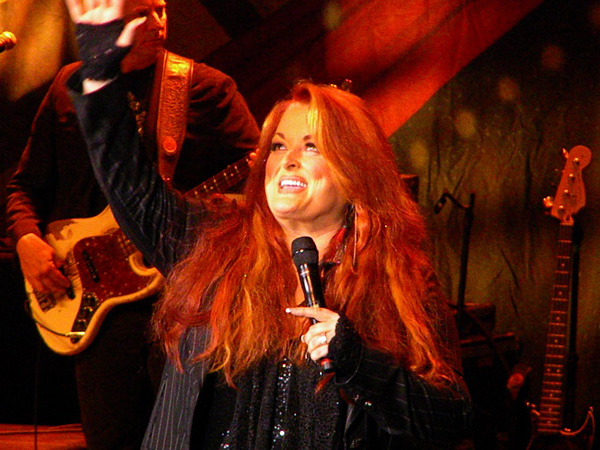 The NIACC Performing Arts and Leadership Series presented Wynonna Judd and the Big Noise Friday night in the NIACC Auditorium.

With the background curtain saying “Love Out Loud,” Wynonna stayed with that theme throughout her performance, singing, talking and joking about her past, her present and her future.

Cracking many jokes about her mother, Naomi, and her sister, Ashley, you could tell the love she had for them. “We (Naomi) could be fighting like cats and dogs, but once we were on stage, we looked at each other and everything was all right. We were family. I love my crazy mother,” Wynonna said with a giggle.

“My teenage kids, don’t have i-pods or i-pads or any of that technology stuff. They ask me for something and I say, “no, go over and ask Ashley.”   I tell them everyday that I am rich…but they are poor.”

Wynonna told a story of a time when her and Ashley were little girls and their mom told them to play outside and not to come in until dark. “Well, you know how that goes, all you need is a rope and a knife. I told Ashley to stand by a tree and I wrapped the rope around her. I told her I’d be back. Three hours later…I came back…with a sandwich,” again giggling and making the audience laugh.

Along with the joking, she had her serious side when she talked about her husband. “When you say your vows and you said for richer or poorer, in sickness and in health, yes these are pretty words, but who would think this would be put to a test a short three months later. My husband was in a serious accident, where he lost his leg and smashed his left hand. I wear his ring on my left hand, because he can’t.”  She thanked the band the “Big Noise,” the band her husband started, for being there for her like the brothers she never wanted.

Wynonna sang to an almost sold-out audience. She sang love songs, old Judd songs and she even rocked out, “You thought I was only country?” She paid tribute to the old Country singers like Johnny Cash, Loretta Lynn and sang a song by Tammy Wynette.

“I rewrote this old Judd song, that was popular 30 years ago. There’s a whole new generation of Judd-heads out there that may not have heard it and will want to buy it. I’m not stupid,” she smiles slyly.

Over two hours, she sang, laughed and entertained the crowd. When she came out for her encore, she started by singing, Grandpa (Tell me bout the Good Old Days) and had the people participate.