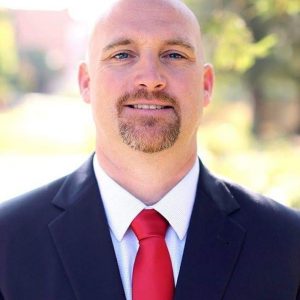 “I am excited to welcome Cam to the NIACC team,” NIACC President Steven Schulz said, “and I look forward to working with him. Cam’s values are a great match to the NIACC culture and NIACC brand that have been established over the years.”

Olson begins his NIACC tenure on June 7. “I am honored and humbled to be leading NIACC athletics into a new era,” Olson said. “With a century of athletic history and a tremendous amount of leadership and stability over the years for the Trojans, it is incredibly exciting for me to carry this torch into the future.”

Olson said he knew early on in the interview process that NIACC was a place he wanted to call his home. “After numerous visits with administration, coaches, and staff throughout this process,” Olson said, “it became very clear to me – early on really – that this is where I wanted to be.”

“NIACC is full of talented and welcoming people who have a strong commitment to learning success and community engagement.”

Olson said he’s excited to get started in his new position. “I am eager to arrive in Mason City,” he said, “to start building relationships with my campus colleagues, athletics staff and student athletes, and within the community as we work together to propel Trojan athletics into the future.”