On Thursday, April 1, 2021, at approximately 6:26 PM, the Mason City Police Department responded to a report of a stabbing at 15th Sheet NE and Pennsylvania Avenue. Upon arrival, officers and paramedics from the Mason City Fire Department provided medical assistance to a juvenile male and an adult male with multiple stab wounds. Both were transported to Mercy Medical North Iowa for emergency care. Both victims have since been released from the hospital.

The investigation into this incident led to the identification of the following as persons involved in the stabbing. Each of them has been charged with two counts of Robbery in the 1st Degee — a class B felony: 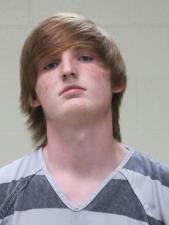 All three are currently in custody at the Cerro Gordo County J ail on $25,000 cash bond, pending further court proceedings.

The investigation into this incident continues. Anyone with inform ati on about this incident is asked to call the Mason CityP olice Department at 641-421-3636.