MASON CITY – A Plymouth man was charged with failure to obey a traffic control device on Wednesday after he allegedly ran a red light and struck a vehicle driven by a Mason City woman.

At just after 1 PM, 82 year-old John Edward Page was driving his 2000 BMW at the intersection of Washington Avenue and 2nd Street SW near Southbridge Mall when his vehicle struck a vehicle driven by 32 year-old Kristin Gayle Daley of Mason City.

Mason City Police and Fire Departments were dispatched to the scene and Daley was taken to Mercy Hospital. Her SUV had rolled over, landed on it’s top and ended up on Second Street.

It was reported that all occupants of the vehicles were out, but were being medically checked.

The accident was on the South side of Southbridge Mall, by the JCPenney stoplight.

“One of the vehicles had to have ran the stoplight,” said a bystander. “Can’t really tell which one.” 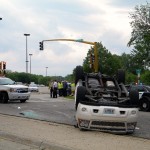 The scene of the rollover on 2nd Street 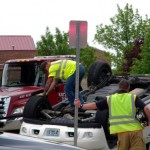 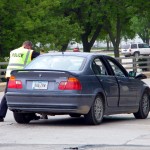 MCPD helping push car out of way of traffic 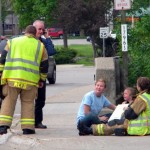 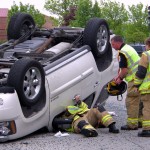 MCFD prepping SUV to be rolled over