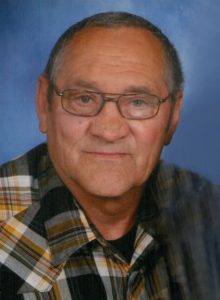 Edward Paul Hejna, of Floyd, passed away in his home on September 19th, 2017. Surrounded by his family, he knew he was loved. He was 74.

A funeral Mass for Ed Hejna will be held 10:30 a.m. Monday, September 25, 2017 at Immaculate Conception Catholic Church with Reverend Gary Mayer celebrating the Mass. Private family burial will be at a later date at Oakwood Cemetery in Floyd.

Visitation will be at Hauser Funeral Home from 2:00 to 6:00 p.m. Sunday, September 24, 2017 and will continue one hour prior to the funeral Mass at the church on Monday.

Ed was born May 2, 1943 in Garner, Iowa, to Frank and Agnes (Korn) Hejna. He attended Ventura High School, where he met his sweetheart, Connie Hollatz. The pair graduated in 1962 and were united in marriage on June 22, 1963 at Saint Wenceslaus Catholic Church in Duncan, Iowa before settling in Ventura.

Ed and Connie welcomed daughter Darcy in 1964 and son Bob in 1967. The young family moved into their home in Floyd, and Ed worked at the Oliver tractor plant in Charles City as a foundry worker. When the plant was bought out and became White Farm, Ed was moved to the experimental department and became a member of the Management Club.

When the tractor plant closed, Ed found work as a welder and mechanic for the Floyd County Road Department. He retired after 25 and a half years of hard work.

Upon his retirement, Ed selflessly dedicated his time to helping others. He enjoyed helping Rick and Louie Peters to plant and harvest their crops, assisted the citizens of Floyd with the sharpening of chainsaw blades and other odd jobs, mowed various lawns, and removed snow for Rick Lensing at 218 Fuel Express.

Ed was a fan of stock car racing. He was a big part of his brother Jerry’s pit crew, and went on to help his two nephews with their racing careers. Most recently, he helped out his nephew Alan with the races at the Mason City Motor Speedway. More than anything else, Ed loved spending time with his friends and family. He was proud of his children and devoted to his grandchildren. He loved watching grandkids Bailee, Caleb, and Ty show animals at the fair, helping grandson Dallas with his new house and vehicles, and being in Harpers Ferry boating and fishing with his sweetheart.

During his lifetime, Ed was a member of the Ventura and Floyd Volunteer Fire Departments, the Steam Engine Club, the Floyd County Snowmobile Club, and was also on the Floyd City Council. Ed was a proud member of Immaculate Conception Catholic Church in Charles City.

Instead of flowers, Ed’s family requests that donations be made to one of the following organizations: the Floyd Volunteer Fire Department, the Floyd County Youth Enrichment Center, St. Croix Hospice, or the Juvenile Diabetes Research Foundation.