MASON CITY – An incident at a Mason City residence led to the arrest of a man on a felony burglary charge.

Mason City police were dispatched for an assault in a residence on the morning of August 31. When officers arrived at 1109 North Ohio Avenue, they discovered 42-year-old Brandon Charles Page. After an investigation, Page was arrested for felony first-degree burglary. He was taken to the Cerro Gordo county jail and held there on $10,000 bond. He now awaits a hearing on September 9. 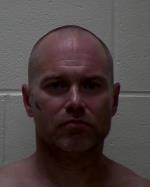