One hand washes the other: Travis Hickey picked by Bookmeyer as next Mayor Pro tem 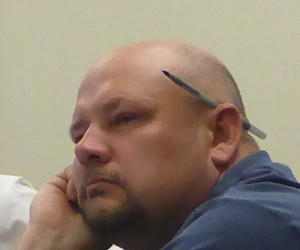 Travis Hickey – shown barely conscious at this council work session – will soon be your Mayor Pro tem, on Eric Bookmeyer’s recommendation. The council will approve (likely 5-0), because three of them are owned by the mayor and the other two won’t stand up to him.

MASON CITY – He once declared that city hall should be run like a McDonald’s, shoulder-bumped another councilman and voted to make his illegal garages lawful – and he’s now Eric Bookmeyer’s pick for a promotion.

Councilman Travis Hickey has been selected by Mayor Eric Bookmeyer to take over as Mayor Pro tem, replacing the late Alex Kuhn.  The Mason City council will decide on the appointment Tuesday night. This is a promotion, and would put Hickey in charge as mayor when Eric Bookmeyer (who recently went to England for a week) is absent.

Travis Hickey has quite the past in office here in Mason City.  He is affectionately known about town as “the shoulder bumper” for occasionally thrusting his meaty upper torso into folks on purpose over the years. Most notably, he made physical contact with councilman Max Weaver after Hickey became agitated during a June 2011 council meeting. A police officer had to escort Hickey away from the scene.

Never mind that he occasionally dozes off in meetings or speaks somewhat incoherently. His deeds speak volumes as to his dedication to the people and well-being of Mason City, the town he represents.

Hickey’s most recent accomplishment was splashing Mason City in the news as the Prestage hog slaughterhouse fiasco came to a morbid ending after tearing the town apart at the seams.  Smarting from defeat, he declared that if he owned a business – he never has, to our knowledge, but if he did –  he would never do business here in Mason City.  Hickey is a board member of the North Iowa Corridor, tasked with luring businesses to Mason City.  No one knows for sure if the Corridor’s training manual states that it’s a savvy economic development tactic to scare businesses away by warning them at a packed-room, televised public meeting to steer clear.

As far as doing business in City Hall, Travis Hickey has some very definite ideas on how that should be done. He once declared with a straight face during a council meeting that city hall should be run like a Mcdonald’s restaurant. In an eloquent explanation that hardly anyone understood, Hickey opined that charging every citizen a fee for asking city hall questions would be something he is all in favor of.

“I’m in favor of chargin’ everybody,” he muttered.

Beyond that, many city workers know that Travis Hickey and his mentor, campaign manager, and virtual life coach Eric Bookmeyer keep a caring, almost step-fatherly watch upon them and their activities. Hickey and Bookmeyer championed measures to have city workers spied upon and monitored with tracking devices, and both have highly scrutinized the hours and pay of our public servants, most-notably police and fire fighters.  Hickey has even gone so far as to dream up new shift hours for our brave firefighters, because as he’s told many people, he thinks they make too much money. 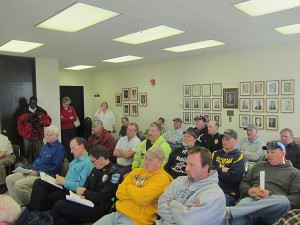 Mason City Sanitation Department workers, March of 2013. After a discussion about the future of their jobs, for the third time in about 16 months, Bookmeyer told them “You all can feel free to leave.”

Travis Hickey – along with Bookmeyer – once led the charge to decimate the city’s sanitation department.  They sent City Administrator Brent Trout on a Google-fest to find out how much it would cost to equip the city’s garbage truck fleet with mechanical arms that would pick up trash cans and dump the garbage into the trucks – possibly eliminating the need for some human workers.  That wild goose chase went nowhere, as did Hickey’s and Bookmeyer’s earlier idea to bring a trash burning plant to town and totally privatize (liquidate) the sanitation department – sell off all the trucks and equipment and fire as many as 15 workers.  As usual, that proposal sputtered and was yet another colossal failure for Bookmeyer, who drug Hickey down with him. As a result of that attack on working people, Hickey became somewhat of a loathed figure to the local labor pool, and he was confronted by a union leader at a 2012 labor picnic. 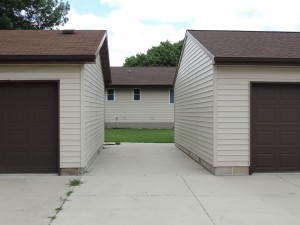 Councilman Travis Hickey’s garages, never connected as a Mason City board ordered, years ago.  He voted for a law that made his garages legal.

Travis Hickey’s career as a councilman got off to a dubious start over an illegal structure on his property. He had purchased the lot (and accompanying house and garage) next door to his home at 920 North Fillmore Avenue and created one taxable parcel. City code allowed for only one house and one garage on a parcel, however, and he was told to remove one house and one garage. He only removed the next door house and kept the second garage. When Hickey later applied for a permit to add-on to his house, city inspectors investigated his property and found the second garage to be illegal, and he was warned that the second garage must be removed.

Ignoring that order, councilman Hickey months later went before the Zoning Board of Adjustment (mayor and council appoint them) in October of 2010 to get a conditional use permit so he could keep his second garage. Despite the board admitting they were “opening a can of worms,” (see video below) Hickey was granted the conditional use permit, allowing him to keep the second garage, but only under the condition that he connect the two garages with a 8′ x 10′ walkway.

Hickey never followed through with the board’s order to connect his two garages. After three new city council members were elected in 2011, the council changed the zoning laws so that Hickey’s two garages on his property became legal.

40 Responses to One hand washes the other: Travis Hickey picked by Bookmeyer as next Mayor Pro tem