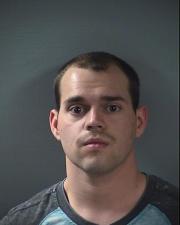 NEVADA, IOWA – An Iowa jury found a former Osage man guilty of first degree murder in the shooting death of a woman he had been texting at a mall.

Alexander Kozak, a married man 22 years of age who spent part of his childhood in Osage, was found guilty of first-degree murder in the shooting death of Andrea Farrington, age 20, back in June of 2015. The shooting took place in the busy Coral Ridge Mall in Coralville, Iowa.

The trial was held in Nevada, Iowa. Kozak now awaits sentencing on June 6.

A Coralville Police Officer was at the Coral Ridge Mall, 1451 Coral Ridge Avenue, Coralville, Iowa, at approximately 7:30 PM, June 12, 2015, investigating an unrelated matter when he heard gun shots in the mall. He immediately communicated this over the police radio. Multiple area law enforcement officers responded to the mall. Upon arrival near the information desk inside the mall, officers found victim, Andrea Farrington, with multiple gunshot wounds to her torso. Farrington was transported to the University of Iowa Hospitals and Clinics, Iowa City, Iowa, where she was pronounced dead.

Kozak had been employed as a security officer at the Coral Ridge Mall since late 2014. He had been working at the mall on June 12th prior to the shooting.